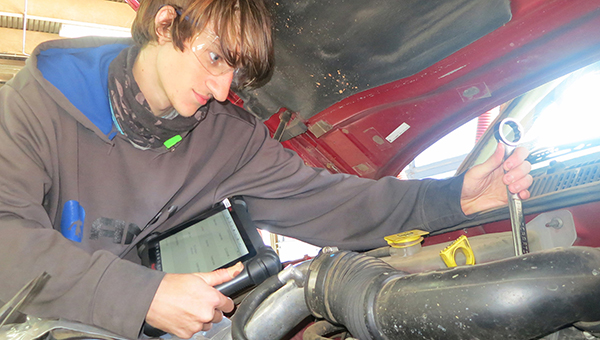 LBW Community College recorded a large number of dual enrollment credit hours during the 2015 summer semester, including those earned by Harley Madden of Samson High School, who has already completed half the credits in LBWCC’s automotive mechanics program and is on track to graduate high school and complete a college credential at the same time. (Courtesy Photo)

LBW Community College ranked as the third-highest among all the public two-year colleges in the state for dual enrollment credit hours during the 2015 summer term, according to a comprehensive collection of data by the Alabama Community College System.

“Thanks to a lot of work and dedication on behalf of many of our faculty and staff, the summer dual enrollment this year totaled 695 credit hours,” said LBWCC President Dr. Herb Riedel. “We knew in the summer that our numbers were high, but now we have a comparison with other colleges in the system.”

LBWCC’s dual enrollment credit hours were surpassed by only two other colleges, both located north of Birmingham.

Dual enrollment is available to high school students to earn simultaneous credit for both high school graduation and a college degree or certificate.

Among the 82 students participating at LBWCC, 31 were enrolled in academic transfer classes, 26 in welding, seven each in computer science and diesel and heavy equipment mechanics, six in office administration, two each in automotive mechanics and air conditioning and refrigeration, and one in cosmetology.

“This level of dual enrollment involvement on our campuses this summer was due to a highly successful team effort,” said Riedel.

“More importantly, students who earn college credit before they graduate high school get a head start on their chosen career path.”