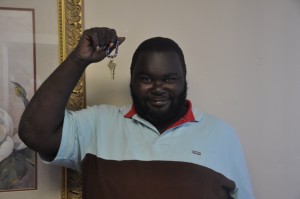 For years, Lewis Jackson, known around the town of Luverne as ‘Bo Jack’, has longed for a place to call his own. After months of support from friends, family and the community, Jackson is finally the proud owner of his own apartment.
(Photo by Beth Hyatt)

During this time of the season, sometimes it is easy to get caught up in the hustle and bustle of wanting more and not really understanding what is truly important. One resident of Luverne recently received the biggest gift of his lifetime through the love and support of his friends, family and community.

To those around the town of Luverne, Lewis Jackson, also known as Bo Jack, is one of the friendliest residents you will ever meet, but up until last week, Jackson did not have a place to call his own. After much prayer and what Jackson says is the grace of God, Jackson is finally able to have a place to call home. “I kept saying, I’m trusting the Lord and one day I will have a place. And one day God heard my prayers,” said Jackson. “Now I have my own place and I thank God for what I do have.”

Over the past few months, the residents of Luverne began to gather support to help Jackson in any way they could. He has been known around the town for years and those in the area understood his need for a permanent residence, so they began to lend him a hand. A few people took the time to spread the word through social media sites like Facebook, and gave people the opportunity to get in contact with someone who could collect any donations. Many of Jackson’s friends have offered him a place to stay in the mean time, and for that he is still grateful.

Throughout all of his struggles, Jackson turned to his church family for support and never let his faith in God slip. He is an active member of the Luverne Church of Christ, and has found comfort and solace by attending services as often as possible. Now that he has his very own home, Jackson says he will still remain an active church member. “I’m going to keep going to church and I’m going to keep my faith with the Lord. I will keep my trust with the good Lord,” said Jackson.

After so many years of searching for his own place, Jackson is ecstatic to be able to go home at the end of the day and relax. “I go to turn the key and I can sit down on my own sofa,” said Jackson. “I just say thank the Lord.”

Jackson has been a member of the community of Luverne for many years now, and he has loved the memories and experiences he has shared with the town. He now looks forward to making even more memories in his very own apartment. When asked what he liked the most about living in Luverne, Jackson said, “Good friends, someone I can count on and someone I can go talk to. I appreciate it all. Everything worked out for the best.”

The community has shown a lot of help and support for Jackson by taking the time to contact close friends of his in order to try and donate items to his new apartment, whether it was furniture for the apartment or food for his pantry. While he may never be able to repay the kindness he has received over the past few months, he sends out his thanks to all of those who helped him, and he is ready to celebrate the holidays, for the first time, in his very own home.

The Crenshaw County Sheriff’s Office is searching for a 17-year old. According to deputies in Highland Home, Myra Alissia Freeman... read more