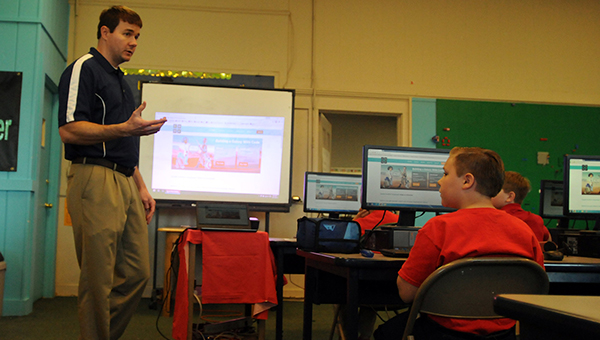 Students throughout Butler County took part this week in Hour of Code, a global effort to reach tens of millions of students in more than 180 countries using more than 40 languages.

Hour of Code started three years ago with a long-shot idea: Get 10 million students to try computer coding. This week, coding lessons have taken place worldwide as part of Computer Science Education Week.

“Hour of Code is a fun way to introduce students of all ages to computer programming,” said Matthew Shell, technology director for the Butler County School System. “It is meant to increase their interest in the field as a possible career choice. This is one career choice that will allow them to work from anywhere and for anyone. Being from a small community like Butler County doesn’t matter. Their only limitation is their imagination.”

“We are demystifying stereotypes that computer science is for nerds only, that you have to take advanced math, that you have to be a genius,” said Roxanne Emadi, a spokeswoman for Code.org, the Seattle nonprofit that sponsors the event.

Shell said he hopes the exercise will also break don any barriers that might prevent female students from pursuing careers in the field.

“Computer programming and technology in general has been pretty much a male-oriented field for years and years,” he said. “But that’s not to say that girls and women can’t succeed in the field. Over the last few years there have been more girls and women go into computer science than ever before in history.”

Shell encouraged any of the girls participating that had an interest in programing, to continue to explore the field.

Shell said while the main goal was to expose the students to programming, the exercise will also help them in their other classes and everyday life.

“What they learn is how to take this big idea that seems complicated, and figure out how to take that big idea and start breaking it down into small steps that they know the can do,” he said. “As they start stacking those steps together, the really big idea is all the sudden possible. So it’s not just useful in coding, but in regular classes and at home. They can use that same mindset from coding. It may seem like this really big thing that can never do, but if they break that big thing down into the little things they know they can do, eventually they’ve done the big thing.”