FDA students get lesson in government 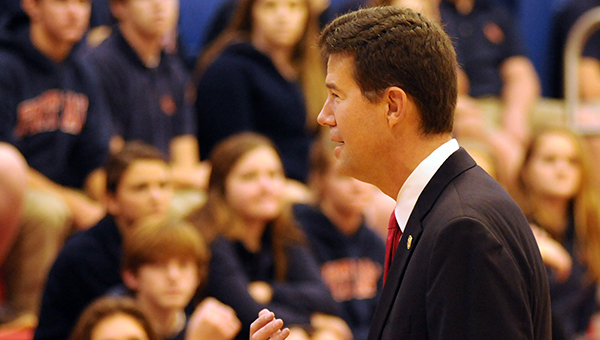 Alabama Secretary of State John Merrill spoke to students at Fort Dale Academy on Wednesday about voting, the SEC primary and the role his office plays in serving the citizens of Alabama. (Advocate Staff/Andy Brown)

Merrill, who was elected Secretary of State in November of 2014, discussed voting, the SEC primary and the role his office plays in serving the citizens of Alabama.

Merrill also addressed the closing of 33 satellite driver’s license officers across the state. All but three of those offices have reopened on a limited basis following opposition from some lawmakers, like Sen. Hank Sanders and U.S Rep. Terri Sewell, who have claimed that the closing of the would make it more difficult for citizens in the state’s poorest region to secure the proper identification for voting because driver’s licenses are the most commonly used form of identification used under the state’s photo voter ID law.

The U.S. Department of Transportation is now looking into whether Alabama is discriminating against black residents by shutting down or reducing services at the state’s driver’s license offices.

Transportation Secretary Anthony Foxx says the DOT is looking into whether the closures are a violation of Title VI of the Civil Rights Act of 1964. Title VI prohibits discrimination on the basis of race, color or national origin on programs and activities that get federal assistance.

Merrill, the state’s chief election official, said that some of the lawmakers and the national media painted a picture of the state trying to make it more difficult for African-Americans to vote.

“What I tried to help people understand initially is that it’s not a black/white issue. It’s a rural issue,” Merrill said. “All the places they closed were in the rural parts of the state, not necessarily the Black Belt. I’ve had to try and convince people that it did not effect what my office is trying to do as far as voter IDs.”

Merrill said the closings would not impact anyone’s ability to vote because voter ID cards would be available at each county’s Board of Registrars office. Merrill said his office also visited all 67 counties in the state at least once, often coinciding with events such as the Magic City Classic or the Peanut Festival, and distributed voter ID cards.

“In Alabama we want to make it real easy to vote, and real hard to cheat,” Merrill said. “I don’t know a better way to explain it than that.”

Merrill related a story of a meeting he had with Rev. Jesse Jackson and Gov. Robert Bentley to explain why he believed the closure would have no impact on voting in the state.

“We don’t have a photo ID problem in Alabama. We don’t have a problem. … We have 4.8 million people in Alabama. We have 1.1 million people in, according to the most recent census that was conducted in August of 2014, that are age zero to 18 years. So if you subtract that number from the big number that would mean we have 3.7 million. According to the Department of Motor Vehicles we have 3.5 million citizens in Alabama that have a driver’s license. We have an additional 750,000 citizens that have visited the Department of Motor Vehicles and have purchased a non-driver ID card. You add the 750,000 to 3.5 million and it adds up to 4.3 million. How many people did I tell you were actually eligible, according to their ages, to potentially be a registered voter in Alabama? It’s 3.7 million. … We have 33 percent more people with a driver’s license or a photo ID card than are even eligible to vote in the state.”

Merrill said he is unsure of what will happen in regards to the DOT’s investigation, but he said the numbers show there is not a problem in the State of Alabama with registered voters having the proper identification to cast their ballots.

“I don’t know what is going to happen,” he said. “I do know we don’t have a photo ID problem in our state.”