Benedict, Reach dazzle at the Ritz 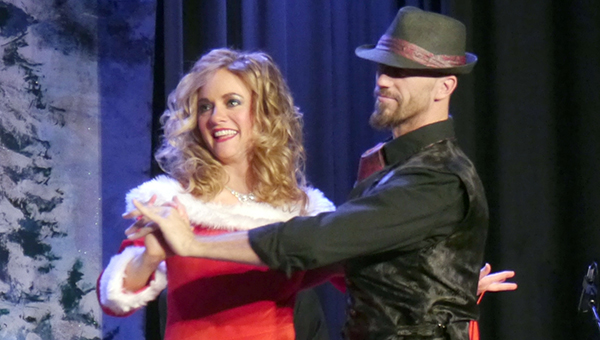 Lindsey Benedict, sporting a red and white gown inspired by those worn in the classic film “White Christmas” performs with Mobile-based dance instructor Aaron Ferguson during the final segment of the show. (Advocate Staff/Angie Long)

It was a night for “swingin’ and singin’ and getting merry like Christmas” Tuesday at the Ritz.

A packed house was there to enjoy the classic and current big band tunes and seasonal favorites delivered by Birmingham native Ray Reach and the Little Big Band and hometown girl Lindsey Benedict.

“A Swinging Christmas,” the latest offering in the artistic season for the Greenville Area Arts Council, showcased the versatility of all the performers, with pianist/vocalist Reach channeling the stylings of musical luminaries such as Frank Sinatra (“Fly Me to the Moon”) and Ray Charles

From Latin jazz (“Oye Como Va”) to swing, Reach and his band had the crowd tapping their toes, singing along and swaying to the music throughout the evening.

Benedict, the daughter of Charles and Margie Kennedy and a Greenville High School graduate, shared more than her impressive vocal range. A trained ballroom dancer, she invited GHS junior Joseph Price to join her as her dance partner during one number. Price, a baseball and football player who dances in his grandmother Susan Andrews’ annual recitals, had eagerly volunteered at a previous Greenville performance of Benedict’s to dance with her.

“What Joseph didn’t know was that I already had someone else — namely, the mayor (Dexter McLendon) lined up to dance with me,” admitted Benedict. “But he’s not missing out this time!”

Tuesday night Price got to perform “Orange-Colored Sky” with Benedict, the pair later joined several audience members on the floor to demonstrate some swing steps.

“That was a lot of fun,” said Margaret Pierce.

Pierce and fellow Ritz Players Jimmy Ansley, Vicki Burt and Dent Neilson all joined Benedict, Price and other audience members to show off their dance steps.

Benedict also shared the stage with Aaron Ferguson, dance instructor at Starlite Ballroom in Mobile, for several numbers, including the humorous “Zat You, Santa Claus?” Jazzy arrangements of familiar seasonal tunes such as “Jingle  Bells,” “I’ll Be Home (for Christmas)” and “Blue Christmas” closed out the show in definite holiday style.

“It was simply a great show,” said audience member Sonya Rice, dance school instructor and Ritz Player choreographer/performer. “You know, it’s not always easy to perform in front of a hometown crowd. It can be nerve-wracking. But Lindsey did not let it fluster her at all. She was wonderful.”

Benedict joined family and friends for hugs all around following the show, and the celebration continued at the after-performance party at High Horse Gallery.

FDA students get lesson in government