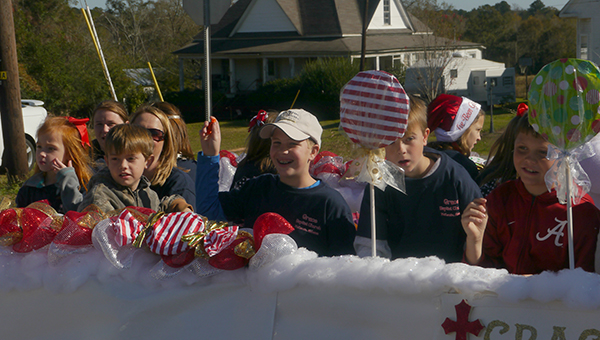 Children from Grace Baptist toss candy from their church’s float to parade-goers during the McKenzie parade. (Advocate Staff/Angie Long)

It was a beautiful day in the neighborhoods of south Butler County last Saturday, picture-perfect for the holiday festivities taking place.

McKenzie kicked things off at 10 a.m. The Georgiana Panther Band provided seasonal tunes as they marched down Main Street for the town’s annual Christmas parade.

The impressive Country Christmas Wagon seen in Greenville’s parade made a daytime reappearance, joining several other floats, vintage vehicles, motorcyclists and marching units from area schools, businesses and churches. Naturally, Santa himself was present, greeting his fans and tossing candy from high atop the firetruck, followed by a horse-drawn buggy.

As always, the McKenzie parade entrants made a return trip down the street, giving attendees an extra chance to wave to those in the parade — and to score more candy.

That same morning in Georgiana, the ladies of the Three Arts Club hosted their annual holiday bazaar at the Georgiana Community House.

“It makes me feel good to see all 600 of these boxed lunches and the containers we decorated with Christmas card cutouts,” said club member Brenda Gruenewald. “The children always enjoy those containers.”

Those who stopped in to pick up their boxed lunches also found a tempting array of home-baked and home-canned goodies, Christmas crafts, flea market finds and more on display, including the club’s new cookbook.  Santa took his break between parades to visit with youngsters, including Georgeanna and Emma Hartin, and hear what was on their Christmas wish list. Funds raised by the event go in support of a number of charitable activities, including college scholarships for high school senior girls.

On Saturday afternoon, onlookers lined Palmer Avenue in anticipation of Georgiana’s parade. Mayor Jerome Antone had promised “lots of bands” when inviting those at the city’s tree lighting ceremony to attend the event.  And he wasn’t exaggerating.

Along with the Georgiana Panther Band, musicians from Calhoun High, Central High of Hayneville, Wilcox Central High and Hillcrest High of Evergreen all marched in Saturday’s parade. Plenty of horsepower was also present, via motorcycle enthusiasts and riders on horseback.