Georgiana-based company making everything including the kitchen sink 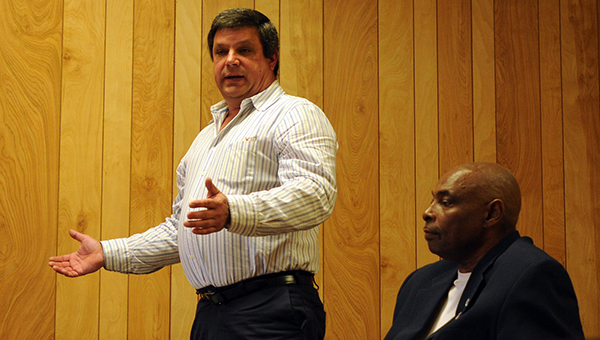 Two longtime employees of CorStone Industries have begun a new venture in Georgiana.

Michael Smith and Jimmy Hunnicutt, who had a combined 25 years experience at the acrylic sink manufacturer, have opened MJ’s Kitchen and Bath Supplier in Georgiana.

After 16 years in Greenville, CorStone stopped production in March of this year.

MJ’s, which is located on Ebenezer Road in a facility owned by the Georgiana Industrial Development Board, manufactures solid surface kitchen and bathroom fixtures.

“MJ’s started at the end of April,” said Smith. “We started out slow. We were in cramped areas. We worked for a couple of months with (Butler County Commission for Economic Development Executive Director) David (Hutchison), Mayor Antone and Lynn Harold (Watson) with the Industrial Development Board for Georgiana and we finally found the space we’re in now. The great thing is that it’s perfect for us right now, but looking ahead we may need the whole 20,000 square-foot facility.”

To date the company has produced more than 450 pieces for customers ranging from New York to Georgia to the Midwest, according to Smith.

The company has also been working to develop new products.

“In that time, Jimmy has created for us 18 different pieces,” Smith said.

The pieces range from kitchen sinks to vanity tops to shower basins.

“There’s a lot of reps that we know,” Smith said. “What we want to do is roll those out and see what they do.”

Smith said the company plans to add five new employees in January and to make an additional $60,000 investment in the company.

“Our target is to get these five people in, get these molds in place, and start growing from that point on,” Smith said.

Georgiana Mayor Jerome Antone said officials were thrilled that MJ’s opted to locate in the city.

Darrell Sanders, chairman of the Butler County Commission, also highlighted the impact the move will have on the south end of the county.

“What (MJ’s) is doing in our county and our town and community, investing in the lives of our people, is huge,” said Sanders. “It’s something we can’t be more thankful for and we look forward to seeing them grow.”

On hand for Tuesday’s announcement was Rep. Chris Sells, who said he’s confident the startup will continue to grow.