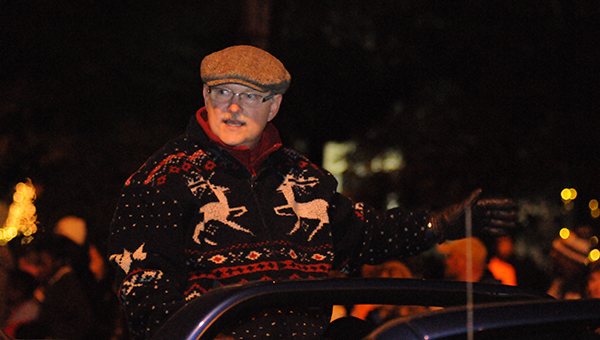 Longtime Butler County Circuit Clerk Allen Stephenson served as the grand marshal for Thursday night’s parade. Stephenson is president of the Butler County Ministerial Association and president of the board of directors for L.V. Stabler Memorial Hospital. He also serves on the board of directors for the Kiwanis Club and the YMCA. (Advocate Staff/Andy Brown)

The City of Greenville held its annual Christmas parade on Thursday night.

A large crowd gathered, despite the chilly temperatures, to watch more than a dozen floats and another 35 entries roll down Commerce Street.

Prior to the parade kicking off, Greenville Mayor Dexter McLendon lit the city’s Christmas tree, which is located in the center of Confederate Park, and ol’ St. Nick made an appearance and chatted with area children about their Christmas wish lists.

The Camellia City was also treated to snow, courtesy of four snow machines, which were rented by the Greenville Area Chamber of Commerce.

The Chamber also spearheaded the judging of the parade floats and entries.