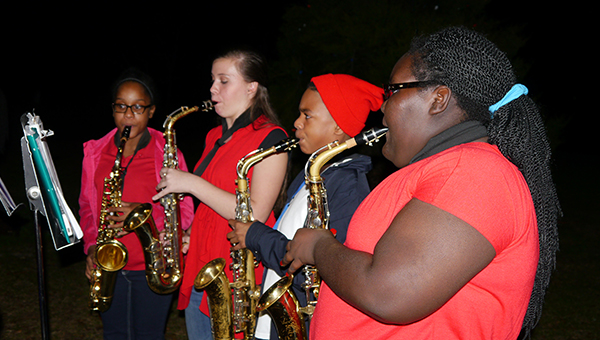 In spite of unseasonably mild temps, the sparkling lights, seasonal displays and festively attired musicians reminded everyone it was indeed the official kick off of the yuletide season in Georgiana Monday night.

Mayor Jerome Antone served as the emcee for the city’s annual tree lighting and concert.  In his opening remarks, Antone encouraged all present to remember “the reason for the season.”

Georgiana City Council member Byron Ward led in an opening prayer before reading the story of the first Christmas detailed in the Gospel of Luke.

GPD Sgt. Jeremy Peagler delivered a soulful rendition of “This Christmas” to open the musical portion of the event.

“This is the time of year to show you care about others. It doesn’t have to be anything big or expensive,” Marlow said. “Shop at one of our local businesses and you help them, too.”

Once the tree’s lights were finally all a-glow, the mayor invited attendees to enjoy doughnuts and hot chocolate. The city’s Christmas parade is slated for this Saturday at 2:30 p.m.