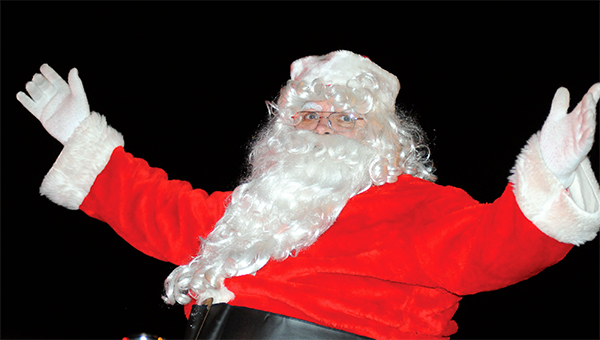 Jolly ol’ St. Nick will make an early visit to the Camellia City on Dec. 3 for the City of Greenville’s annual Christmas Parade. (File Photo)

It’s beginning to look a lot like Christmas in the Camellia City, and once again it is time to celebrate with the annual Christmas Parade. This year will be full of new surprises, according to Francine Wasden, executive director of the Greenville Area Chamber of Commerce.

“We’ll have snow in the park, and I am so excited,” said Wasden. “We are praying for no rain, but it will be fun no matter what.”

This year before the parade, guests will have the opportunity to grab a bite to eat at the Good To Go food truck, which will be parked in front of Newton Oil Company. The truck will open at 5 p.m. and will host a variety of foods such as hamburgers, hotdogs, nachos and more. All proceeds from the food truck will go to benefit the Chamber of Commerce for future sponsored events. The surrounding streets will also be blocked off starting at 5 p.m.

After stopping by the food truck, families are then encouraged to make their way to Confederate Park, where a winter wonderland will await them. This year, snow is scheduled to be in the forecast for the park as Santa makes his grand arrival. Disney characters such as Olaf, Anna and Elsa will be on hand to greet children and also pause for a photo.

The ceremonial lighting of the Christmas tree will take place at 6:15 p.m., conducted by Mayor Dexter McLendon, and the parade is slated for 6:30 p.m. This year, the parade will start at the intersection of Bolling and Commerce Street.

“There’s still time to enter,” said Wasden. “We’ve extended the deadline for floats, cars and entries into the parade until Monday.” Anyone interested in participating can pick up an application at the Chamber office or online at greenvillealchamber.com. Applications can be faxed to the Chamber or hand delivered to the office or Wasden. There will be a small entry fee for those interested in submitting a float or vehicle.

“Country Place is helping us do that. We’re going to set some chairs up that’s going to give the seniors a view without people standing in front of them,” said Wasden. “So, if someone is bringing an elderly person and needs to park, they need to park next to City Hall.”

Allen Stephenson will serve as grand marshal for the parade.

Stephenson, a two-time Citizen of the Year, is also the “Voice of the Greenville Tigers.”

“I was flattered to be chosen to be grand marshal,” Stephenson said. “It’s really quite an honor.”

Stephenson and his wife, Gina, have four children: Brian, Lauren, Beth and Jasmine. The couple has three grandchildren.