Pets parade for prizes in park 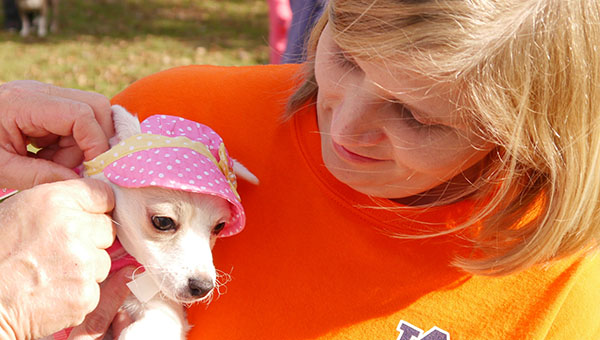 There were brunettes, blondes and a redhead or two, some sporting colorful costumes and other sticking with sleek fur coats. And they all hoped to be chosen “Best All-Around” Sunday afternoon.

These four-footed beauties were on parade as part of the fall edition of “Bark in the Park,” the Butler County Humane Society’s semi-annual community event.

Thanks to contest entry fees, Mrs. Claus photo purchases, donations and food and gift sales, the event raised $260 for the animal welfare organization.

However, volunteer Tom Matthews says the BITP is much more than just another fundraiser for the organization.

“This is a great chance for pet owners to come out and enjoy socializing with other animal lovers. You get out of the house, get some fresh air and exercise,” Matthews said as he grilled Polish sausages at the concessions tent. “It’s good for our pets, it’s good for us. It’s a great way to raise awareness of what we do for the animals.”

Each of Sunday’s 17 canine contestants earned a title and a prize of their owner’s choice, while Pluto, Cole Stinson’s handsome bulldog earned “Best All Around” and the grand prize basket.

And here are the other contestants, their escorts and their titles:

“We’ve actually had our best turnout yet for the event,” said Kimberly Matthews, BITP chairperson. “I am really pleased and appreciative of everyone who came out and all our volunteers, especially Major Delay for being our emcee and deejay and Linda McVay for stepping in as Mrs. Claus.”

“We had a wonderful time today,” Duncan said.