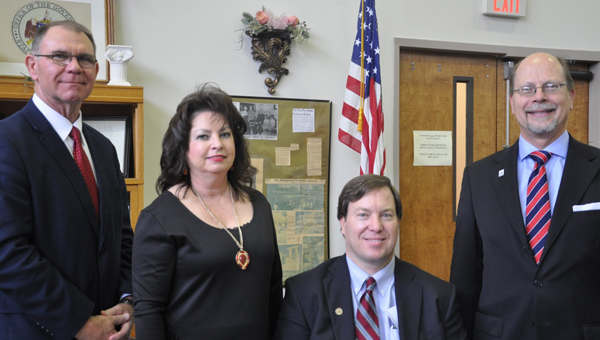 LBW Community College Luverne Center held its Multicultural Celebration on Tuesday, and welcomed nationalities from all over the world to join in and share their culture. Pictured are, left to right, Jimmy Hutto, associate dean of Adult Education and Workforce Development; Laura Elliott, Luverne Center director; Graham Sisson, Jr., director of the Office on Disability for the Governor of Alabama; and Herbert Riedel, LWBCC president.

Diversity is a quality that is becoming more and more celebrated in our culture today. That celebration was brought to life on Tuesday as the LBW Community College Luverne Center presented their Multicultural Celebration, which featured Israel, the Philippines, Japan, Scotland, Mexico, Thailand, South Korea, India, America and Turkey.

Booths, food and music from these nationalities were represented at the festival and guests were given the opportunity to interact with a few students in attendance that represented their homeland firsthand.

“We are more multicultural today in Alabama than we’ve ever been,” said LBWCC President Herbert Riedel.

The keynote speaker for this event was Graham Sisson, Jr., director of the Office on Disability for the Governor of Alabama.

Sisson was injured in a car accident in 1982, which left him paralyzed from the waist down. Since then, he has used his disability as an avenue to tell others about the many strengths that those with disabilities possess as well as the difficulties they face on a daily basis with being accepted.

Sisson stressed the importance of demonstrating acceptance to those who may look, act or speak differently than you, and knows firsthand what it feels like to be looked at as someone who is considered different. Sisson now serves as an attorney for the state and focuses on helping those with disabilities.

“Inclusion isn’t just a law, it’s a philosophy and a way of thinking,” said Sisson. “Remember that people are people, whatever their differences are. Everybody has something valuable to contribute.”