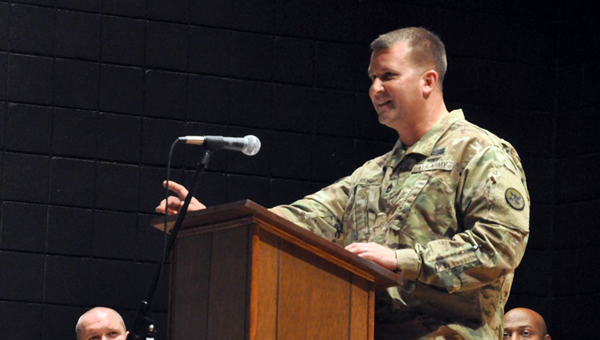 U.S. Army Sgt. 1st Class and Luverne native Sandy Smith served as the keynote speaker at the City of Luverne’s Veterans Day Celebration Wednesday at the Dei Center at the Luverne Methodist Church. Smith has served in the armed forces for 23 years.

When service men and women bravely take up the call to arms, many of us are at a loss for how we can honor them.

This Veterans Day, Crenshaw County honored its veterans by holding a ceremony dedicated to showcasing the valor and courage shown by these men and women. On Wednesday the Crenshaw County Veterans Day Celebration was held at the Dei Center at the Luverne Methodist Church. Veterans and those in the service were honored, recognized and were given the chance to share their testimonials.

Hilda Maddox, vice president of the Friends of the Luverne Public Library group, has been a part of this program for at least six years.

“We can never repay those guys that took time out from their lives to fight for our freedom and our country,” said Maddox. “To me, there’s nothing any greater than that.”

The keynote speaker for this event was U.S. Army Sgt. 1st Class Sandy Smith, a Luverne local who has served 23 years total in the service. Smith was honored to once again be back in his hometown and to see all of the men and women supporting the Crenshaw County veterans.

“It was an honor to be able to talk this year and to be able to share my experience with others,” Smith said. “A lot of people don’t realize that these people (soldiers) gave it all for the freedom we have. It’s important to always remember that.”

The ceremony included the singing of many different patriotic tunes, an individual musical salute to each branch of the service and a silent toast to those lost in combat with the Missing Man table display.

Army Pfc. Willard Bees, like many others during this time, answered the call of war at the age of 22.... read more