Blackmon serves community for half century 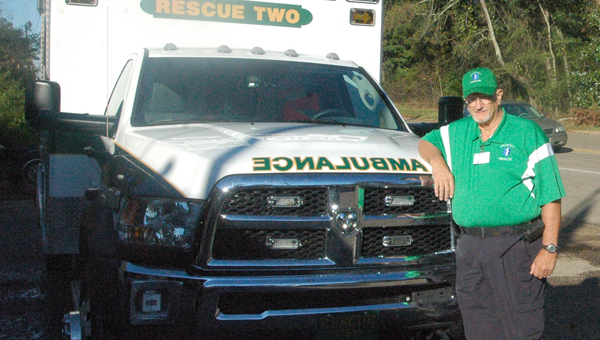 Wayne Blackmon has been a part of Brantley Fire and Rescue since 1966. Blackmon was honored for his service at a reception that was held Oct. 18.

Wayne Blackmon has been a part of Brantley Fire and Rescue since 1966 when Rescue Squads were very different.

“When I first started all we had were basically funeral homes would put a siren on top of their hearse,” Blackmon said of the inadequate emergency services in the community.

Blackmon has served his community as a part of and even, in the past, captain of Brantley Fire and Rescue for close to 50 years and has helped build the organization from the ground up.

The catalyst to the Brantley community demanding more adequate emergency services came as a result of an accident at the top of a hill just down the street from the current Brantley Fire and Rescue building.

“A lady bled to death waiting on an ambulance to come get her, and shortly after that they decided to get us something better for us to transport people with,” Blackmon said.

All of this was happening in the 60s, during segregation, when separate ambulances usually transported blacks and whites.

“I’ve actually been at an accident where a white person was the fatality and the injured person was a black man,” Blackmon said. “He was bleeding, but obviously still alive, and the white ambulance came and picked up the white lady and just left the black man bleeding on the side of the road.”

Despite that being the norm during that time, Brantley Fire and Rescue did not conform with the segregation.

“When we took over we were not selective, the color of your skin did not have any effect on whether or not we picked someone up,” Blackmon said.

Brantley Fire and Rescue started out with volunteers with standard three-day EMT training, but as the years went by the team received more and more advanced training.

“Back then rescue units still didn’t get much training, all they wanted to do was throw you in the back of the truck and haul you to the hospital. We didn’t want to do that, we wanted to be trained to take care of people that were hurt,” he said of the squad’s desire to help the community.

The continued training and desire to learn of Brantley’s Fire and Rescue team led to what Blackmon describes as one of the best volunteer rescue squads in southeast Alabama.

“There may be bigger squads but as far as training and equipment, I would venture to say we are one of the best teams in southeastern Alabama,” he said of Brantley Fire and Rescue.

Having to see countless injuries and fatalities over the years as a part of Fire and Rescue can wear on a person, but for Blackmon it was all of the people they helped that stood out the most to him and was the most rewarding part of the job.

“I really remember more the people that we have helped. I’ve dealt with plane crashes, fatalities, and tons of really bad accidents, but the ones that stick with you are the ones that you know that without your work and God’s assistance that person wouldn’t be walking around today,” he said.

Despite still being strictly a volunteer group, Brantley Fire and Rescue has a team of well-trained emergency service personnel and excellent equipment including a new state-of-the-art ambulance, he said.

Blackmon is a big reason for that and is still going strong after decades of serving his community but has stepped back in recent years to allow the younger members of the team to step forward.

After decades of serving his community, Blackmon missed much of 2014 with his own health issues but has bounced back and is doing as well as ever, and he says that he still hopes to go another decade before retiring from the Rescue Squad.

“I actually spent more time doing this than I did in my real, money job over the years, and it is just something I love to do,” he said of his love for the team.

“Wayne was one of the first paramedics in Brantley,” said Sylvia Davis, rescue captain. “He has made a life-long commitment to this community and surrounding area. Brantley Rescue has been honored to have him around for the last 50 years.”

Beth Hyatt has been tabbed to lead Greenville Newspapers, LLC’s coverage of Crenshaw County. Hyatt, who was hired as a... read more