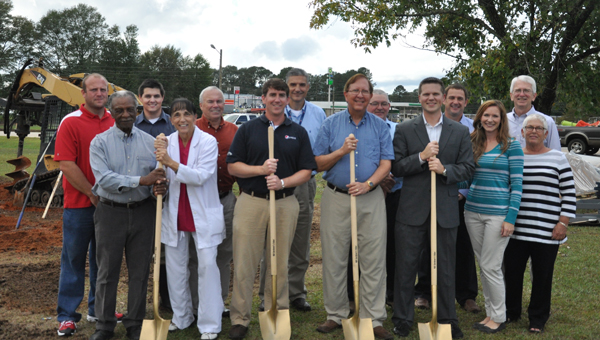 After almost three years, the City of Luverne will soon welcome a brand new playground at E.L. Turner, Jr. Park.

The Luverne City Council accepted a bid from DMD Engineers, Inc. for the playground project, and the groundbreaking ceremony was held Monday. The estimated cost of the project is $110,000, which was secured through donations and a $55,000 matching grant from ADECA.

Travis Colquett, a member of the Kiwanis Club in Luverne, has been patiently waiting for this project to come to fruition since it was first mentioned almost three years ago.

“I kept hearing my wife and other parents talking about how the old park equipment was falling down and not safe. Then I began seeing my wife travel 30 to 45 minutes away to let my kids play on a safer playground,” said Colquett. “At this point I went to the city council and requested permission to pursue a possible new playground where the city didn’t have to pay a dime. They agreed and sent me on my way.”

Colquett knew Troy Hudson from DMD Engineers, Inc. and heard that Hudson had worked on grant projects in the past.

“I found him (Hudson) at the park one night and pitched the idea to him. He was excited and said he would help in any way he could,” said Colquett.

After securing the engineers for the project, the next task was to find the grant. Through the Land and Water Conservation Fund (LWCF), everything was compiled for submission.

“It was submitted and awaiting approval when the government shut down. Although it opened back up weeks later it caused a back log of approvals from the LWCF,” said Colquett.

In the mean time, Colquett decided to take the matter of raising the extra funds into his own hands. The project still lacked $60,000 when Colquett began to visit several local businesses, call and mail out letters.

Colquett knows that without the contributions of Pepsi and the contribution in memory of the late Mrs. Lucy Jackson, the $61,000 would have been much harder to raise. The park is suspected to be up and running by the end of the week if all goes according to plan.