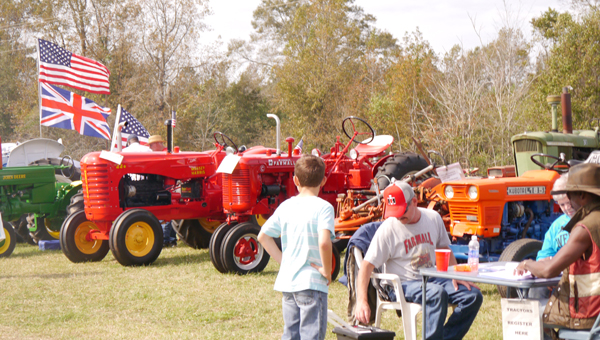 As always, a long line of tractors from a number of decades of the 20th century were on display at Old Time Farm Days. (Advocate Staff/Angie Long)

Saturday morning’s chill gave way to mild temperatures, a brisk autumn breeze and clouds that hinted at rain but didn’t deliver. It all combined to make it a perfect time to celebrate all things rural at Old Time Farm Days.

By midday, the OTFD site on Sandcutt Road was buzzing with more than the occasional bee. The pastureland serving as a parking lot was almost full, while tractors pulling trams stayed busy transporting visitors back and forth.

“I think we’ve had more people here than the last couple of years, which is great,” said Dale Gates.

Gates, his fellow scout leaders,  Cub Scouts from Pack 45 and Boy Scouts from Troop 520, all put in a full day volunteering at the event. The boys and young men did everything from assisting on the trams and carrying purchases to attendees’ vehicles to taking orders at the OTFD kitchen.

“The scouts enjoy working the event every year and I do too. It’s tiring but it’s worth it,” Gates said.

Attendees of all ages milled around the nearly 20 vintage tractors on display, while children romped on the haystack slide and enjoyed barrel rides pulled by ATVs. Event emcees Kyle Haynes and David Norrell of Q-94 kept the music going and promoted activities such as the pedal tractor race, chicken chase and the ever-popular cake and cupcake walks.  In between activities, local vocal talents Katye Giddens and Max Conway harmonized on a variety of country favorites for the crowd.

A total of 17 tractors were part of the annual afternoon parade.  Vehicles made by John Deere, Farmall, Massey-Harris, Kubota, Ford and Allis-Chalmers were all featured, driven by owners from as far away as Verbena and Holt, Fla., with Repton, Linden and Wing among the other communities represented.

At the booth manned by the Butler County Humane Society, one of several volunteer organizations represented at the event, Brenda Whitney was delighted that her own previous day’s efforts had paid off. The BCHS volunteer had taken a day off work in order to bake a variety of mini-loafs to raise funds for the county’s homeless animals. By midday, almost all her wares had sold.

“I had a whole table full when we started — 41 — and now there’s only two left,” Whitney explained with a smile. “We had a really busy morning.”

For those who wanted to get “hands on” with the cute and the cuddly, the OTFD petting zoo with everything from alpacas to guinea pigs was a big draw. Cub Scout and petting zoo volunteer Jacob Pryor said he particularly enjoyed petting a certain black and white rabbit.

“I think that bunny was everyone’s favorite,” he said.

Corn shucking and grinding, cross-cut sawing, milking and watching a blacksmith at work were some of other activities that drew youngsters’ interest at the annual event. For anyone wanting some homemade goodness as a souvenir, handcrafted items for house and garden, home-canned jams, jellies, salsa and more were also on offer, along with fresh produce, raw honey and old-fashioned cane syrup.

“It was a really fun day, and those who missed it, missed a lot,” said