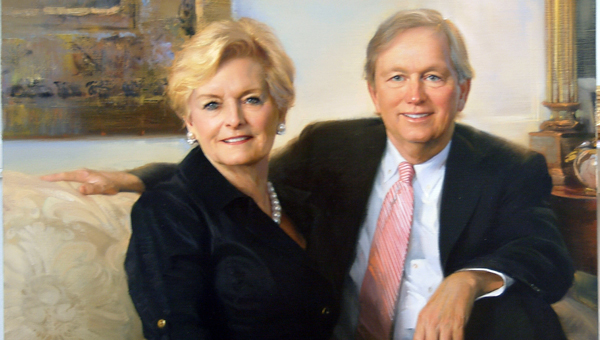 Greenville natives Warren and Sallie Williamson were recently recognized for their contributions to the University of Alabama.

On Oct. 22, Warren and Sallie, along with 15 other inductees became charter members of the Bryant Society.  This is the pinnacle of the lifetime giving society at the University of Alabama distinguishing individuals and organizations who have made contributions of at least $1 million.

In the 1920s, University of Alabama President George Denny felt strongly that a nationally recognized football program would pay immeasurable dividends in elevating the image and prestige of the University of Alabama.  During Chancellor Robert Witt’s tenure as president, he embraced the Denny vision, supporting the Athletics Department with the keen understanding that a powerful program only enhances the overall goal of making the university foremost in education with the finest academic and student facilities as possible.

“The commitment to improving all athletic facilities is a never-ending process,” said former Athletics Director Mal Moore, who spearheaded the task of providing student-athletes with the best possible venues in which to compete in.

As the athletics department at the University of Alabama is self-sustaining, all private gifts contribute directly to the needs of our student-athletes, coaches and staff.  Private support enables UA athletics to increase its standing, in both athletics and academics, over competing universities.

Warren and Sallie, both graduates of Alabama, first met at the university. Sallie was a member and officer of Kappa Delta sorority, and Warren was a Sigma Nu and also president of the Interfraternity Council.  Warren served in the United States Navy at the National Security Agency.  He was a linguist/cryptographer with North Vietnamese being his language.  After Warren graduated from  Cumberland School of Law in 1978, he and Sallie moved to Greenville.  Warren practiced law with his father and brother in the law firm of Williamson and Williamson.  Warren also served as assistant finance director and special counsel for Gov. Fob James.  Upon leaving government, he became a private business owner and has remained in that arena since.

Sallie and Warren are active in the First Presbyterian Church of Greenville, where they have served in many capacities. Warren is a board member of Reformed Theological Seminary.  He and Sallie have recently returned from New York City where the seminary opened its seventh campus in association with Tim Keller.

Sallie and Warren recently celebrated 45 years of marriage.  They have three married daughters and 11 grandchildren.