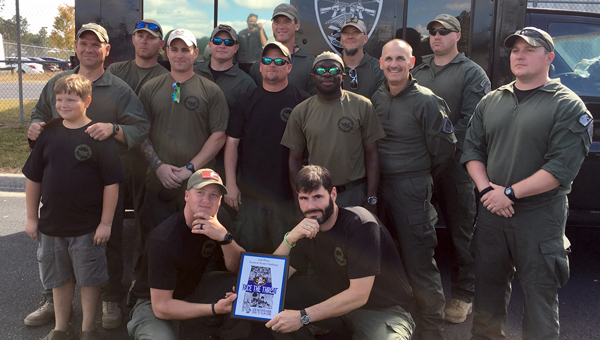 The Greenville Police Department’s Special Response Team claimed second place at the Alabama Tactical Officers Association Tactical Tournament. It marks the third year in a row the team has finished in the Top 3. (Courtesy Photo)

The Greenville Police Department’s Special Response Team has proven once again that it’s among the state’s elite tactical units.

On Thursday, the team captured second place at the Alabama Tactical Officers Association Tactical Tournament in Columbiana, Ala. Only Tuscaloosa’s unit finished ahead of Greenville, which won the competition in 2014.

“We were a little disappointed that we didn’t get first, but we’re happy to have finished in the Top 3 and get recognized as one of the state’s best tactical teams,” said Capt. Justin Lovvorn, Team Leader.

In 2013, Greenville’s team finished tied for second, but ultimately finished the competition in third place due to the tiebreakers.

“This was year was sort of different,” Lovvorn said. “We’ve been getting better and better every year, and other teams have started to take notice. After winning last year, you could tell the other teams were gunning for us this year. I think that kind of got to us a little and we missed a few shots that we normally make. We really had an off day on the day of the competition and we still finished in the Top 3. I think that says a lot about our team.”

Greenville’s team was the smallest in the competition and is still relatively young. The team was formed in 2005 and has managed to retain a core group of team members that have been on board since the very beginning.

“I think that’s a big part of why we’ve been able to be so successful,” Lovvorn said. “These bigger teams have a lot of turnover. Guys leave for other divisions or other departments. We’ve had five or six guys that have been on our team from the start, so we know each other. We add a new guy here and there, but we’ve been together so long that we don’t have to spend a lot of time getting to know each other. We know how our partner is going to react. We know what to expect.”

The Tactical tournament, which is held in conjunction with the Alabama Tactical Officers Association’s annual conference, is a physically grueling contest that tests a team’s ability to perform in a variety of scenarios.

“As a team we got a lot of good tactical-based training during the week,” Lovvorn said. “They have instructors that normally only teach the military or special forces, but because it’s a statewide event, we’re able to learn from them.”

“We’re the smallest city and department to send a team to the competition,” he said. “They’re competing against departments like Tuscaloos and Lee County that have as many officers on their tactical teams as we have in our departments and they always finish at the top. I’m very proud of our guys. They do an outstanding job for our community.”