Cam Turner spent about five hours on his project. But it was a labor of love. He said he really identified with the characters.

“It’s a very funny story,” Turner said. “I like how the character, Nick, is very creative. My favorite character was Mrs. Granger. She was very strict.” 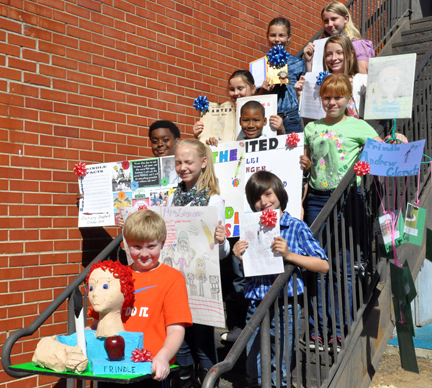 The story is about Nick, a boy who eventually realizes his strict teacher was on his side all along.

Raylee Lowe was a big fan of the book.

“I like how Mrs. Granger and Nick made a connectional bond at the end of the story,” she said.

Emma Foster won the top prize for her project.

“I liked the part when Nick made up a word and the word just spread around the world,” she said.

Normally, fifth-graders read two chapters of the Clements novel in their reading books and then move on to the next story. But, language arts teacher Lisa Cox thought students would benefit from reading the entire book. The resulting projects showed how right she was.

“I wanted students to understand why teachers push them. Assigning a project made it more than just, ‘study this and take a test.’ It asked what can you do on your own,” she said. “We’re very fortunate we’re in a system that allows us to choose things like that.”