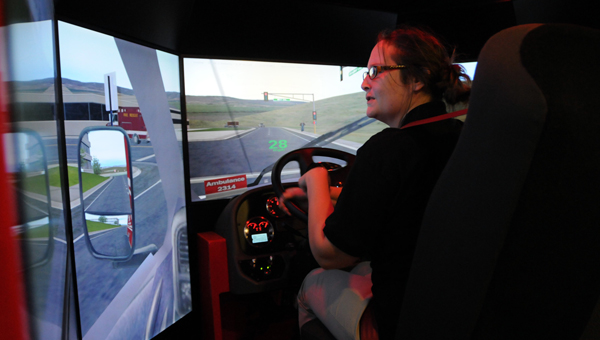 Butler County E-911 dispatcher Rosie Till learns what it’s like to guide an ambulance through traffic on the way to an accident scene. (Advocate Staff/Andy Brown)

Rosie Till found herself in an unusual position Monday afternoon.

The Butler County E-911 dispatcher was behind the wheel of an ambulance speeding to the scene an accident.

While the pressure Till felt in racing to the scene was real, the event was only a test.

The simulator is able to mimic a number of vehicles, such as ambulances, fire engines, police cruisers and dump trucks. The simulator also offers varying weather conditions from rain to snow, and even glare on the windshield.

Those who think the simulator is just a fancy video game would be wrong.

It’s a sophisticated tool that closely mirrors the actual handling of the selected vehicle.

“It’s not as easy as I thought it would be,” Sandy said. “I do not drive the big rigs often, but I did get better as the day went out. This is a very good tool.”

Till said the experience of being behind the wheel of an ambulance, so to speak, will be a benefit to her in her job as a dispatcher.

“It allowed us as dispatchers to put ourselves in the shoes of the first responders who actually go to the scene,” she said. “We dispatchers have a lot of stress sometimes in the center when a major event occurs that requires us to utilize all resources, so I feel it showed us some of the obstacles and stress the driver’s of emergency vehicles have as well, along with the police and deputy units.”

Sandy said the simulator, which has been made available to all county employees, allows employees to get exposure to a number of different vehicles they may operate in their jobs.

“It is a driving simulation, so they are learning real life skills by driving in numerous different scenarios,” she said. “It is good practice for the different types of vehicles that they might drive, and it allows them to practice in a non-stressful environment.”

The only cost for the county in bringing the simulator to town was the cost of the diesel fuel to operate the simulator.

The Butler County Democratic Party has announced that it will open qualifying for the 2016 elections on Monday. Qualifying will... read more