Hundreds turn out for PEC meeting 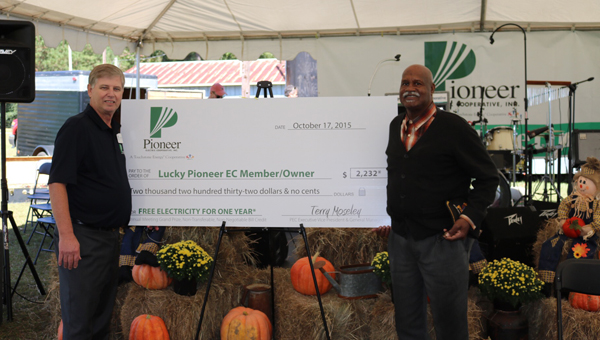 Saturday morning it was looking and feeling like fall at the Kiwanis-Butler County Fairgrounds as Pioneer Electric Cooperative held its annual meeting.

Several of the approximately 35 PEC employees on site shuttled those in attendance back and forth via golf carts throughout the morning.

As usual, the colorful Touchstone Energy Balloon was a big draw for those wanting to experience a brief taste of what hot air ballooning is like (with a tether to keep anyone from soaring away). Inside the hall, PEC’s Vicki Russell and Phillip Baker used the Safety Town display to demonstrate the many uses and potential dangers of electricity to the youngsters present.

Older folks took a trip down memory lane via the musical stylings of popular local band Southern Legends, who played classic country and rock ‘n’ roll tunes for the crowd gathered under the big tent.

During the meeting, election winners for Districts 1, 4 and 7 were, respectively, Tommy Thompson, Tom Duncan and John Henry, with each candidate running unopposed and garnering 100 percent of the votes cast in their district.

“We had approximately 200 of our members register with another 150 or so of their family members tagging along for the fun,” said Casey Rogers, communications specialist for PEC.

“We appreciate everyone who came out on this beautiful fall day.”

Pioneer Electric Cooperative has provided power to the community for 77 years, serving 11,000 members in southeast Alabama.

A pair of Butler County Schools are in the running for a $2,500 grant. McKenzie School and Greenville High School... read more