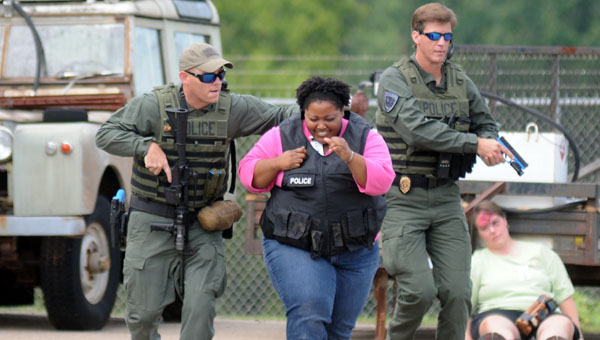 In the wake of numerous national tragedies such as the shootings at Umpqua Community College in Oregon, Sandy Hook and the theater at Aurora, Colo., the Greenville Police Department is offering a new self-defense course in the event of an active shooter situation.

Capt. Justin Lovvorn, who is one of three GPD officers that the U.S. Department of Homeland Security certified to teach the course, said that being prepared in the unlikely event of an active shooter situation could be the difference between life and death.

“Every time you turn around, something’s happening.  Luckily, that’s not the case here, but people are more aware of it than ever,” Lovvorn said.

“It’s especially helpful for larger businesses that have a lot of traffic and a large customer base. And even if you’re not a part of a business, it applies for just everyday life — whether you’re just going to the store or anywhere you may be, knowing this stuff gives you options if something were to happen.”

The free hour-long course covers the options available in active shooter situations, whether they are businesses, schools or outside in crowded areas.

It details what to do first to save yourself and others around you, while gradually adding options based on whether escape is possible and, eventually, how to confront the shooter even while unarmed.

The Greenville Police Department is also one of a handful to not only adopt the Department of Homeland Security’s course, but also build upon it with an additional hour-long advanced course that focuses on more hands-on techniques.

The active shooter self-defense course differs greatly from other courses Lovvorn has offered in the past, however.  Rather than learning about how to shoot, it’s more about deescalating a situation to the point where no one gets shot at all.

“This has nothing to do with weapons familiarization,” Lovvorn said. “The only thing it has to do with what we teach in this course, if anything, is how to take a weapon away from someone.

“The advanced course goes into a more hands-on scenario with learning disarming techniques and building confidence.  Rather than just telling you what you can do, we go into a more hands-on approach and lets you take away dummy guns to let you see what actually works.”

Though the likelihood of active shooter situations occurring in the surrounding area may seem slim compared to other regions throughout the nation, history has proven that it’s impossible to predict where such a tragedy can strike.

Lovvorn said that, given the free nature of the program, it’s better to err on the side of caution.

“If I owned a business or dealt with a large amount of the public on a daily basis, it would really weigh on my conscience not having this course,” Lovvorn said. “It’s free, it doesn’t take very long and it greatly increases your chances of a positive outcome if something were to happen.

“Studies have shown that people who have acted in the way we’re teaching in an active shooter situation have greatly increased chances of survival.  It’s been shown that these reactions that we’re teaching have saved lives.”

Lovvorn added that the department is willing to come to businesses, schools and to individuals to teach the course.