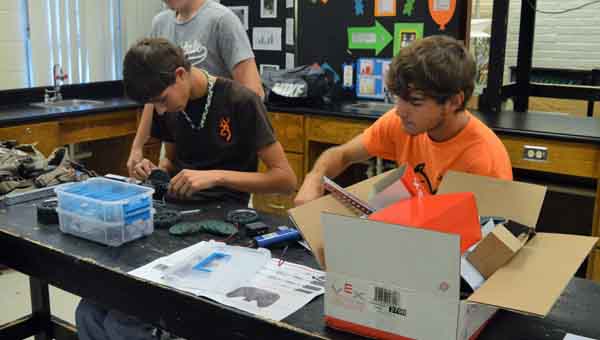 By BAILEY BRYAN
Special to the Journal

The Brantley High School robotics class, taught by Mr. David Watts, will make an appearance at the upcoming board meeting on Oct. 19 at 6 p.m.

This is an engineering class, so the students will gain a lot of real-world application and hands-on problem solving skills.

When asked what his favorite thing about the class was, Jake Silva said, “Getting to build whatever I can think of. It’s a challenging class. But, if you’re real imaginative you get better robots. You also need good patience for this class, because as you’re building a robot you’ll find things wrong with it that you have to go back and fix.”

The class has been working very hard, and so far they have built three robots.

The students had a guide to help them with the first build, but since then they have been doing free builds.

The students are about to start learning how to program their remotes to the robots, instead of using the pre-programmed remotes.

Brantley’s robotics class has had three head-to-head competitions between the three groups in the class: a claw bot race, tractor pull race and a drag race.

Watts said he hopes to have a countywide robotic competition amongst the three schools soon.