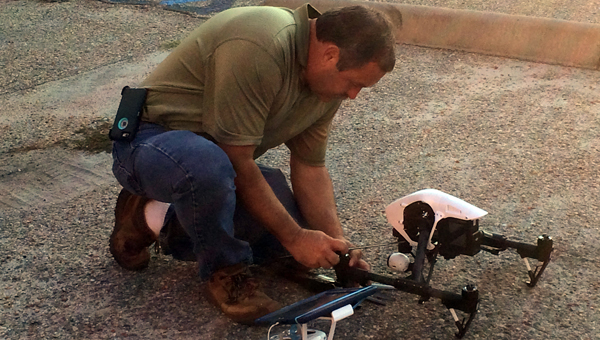 Greenville City Council members got a bird’s eye view of the Camellia City on Monday night courtesy of the city’s new unmanned aircraft.

“I think this a great tool for us,” said McLendon. “We can use it to show people from out of town about our community. We can use it in a number of different ways. For instance, if a physician is interested in coming to town, you could fly over the hospital and show him the campus and even have all the employees come out and wave. If there’s a developer interested in a piece of property we can show him an aerial view of that property and he can take that back to his investors.”

In a video shown to councilmembers on Monday night, the drone was used to capture footage of Cambrian Ridge, downtown Greenville and construction projects around the city.

John Haire, who has extensive experience with remote control airplanes, pilots the drone for the city. He said that for the video shown Monday night he flew at 200 feet.

Haire flies the drone with a remote control and can see what the drone sees via an iPad.

“When it loses signal for any reason, whether transmitter or video, it comes back home,” said Haire. “It has a GPS lock on wherever I take off from.”

McLendon said the city has previously use a drone to film traffic patterns in the city for use by the Alabama Department of Transportation.

“That footage will be used to help clean up some of our traffic problems,” said McLendon.

McLendon, who invited representatives from the Greenville Police Department and Butler County Sheriff’s Office to the meeting, said there will likely be tactical or search and rescue situations where local law enforcement officers can benefit from the use of the drone.

“There’s really no limit to the number of ways we can use this to benefit our city,” said McLendon.

McLendon said it will be 90 days to 120 days before the city has complete approval from the Federal Aviation Administration to operate the drone.