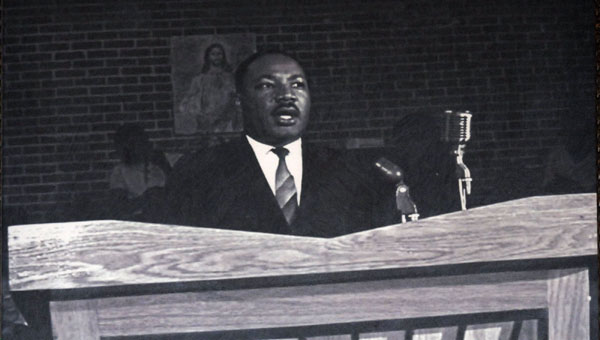 On Thursday night, nearly 50 years later, city officials and members of the community commemorated that visit with the unveiling of a photo of King speaking at Greenville’s Harrison Street Missionary Baptist Church.

“This is a very momentous occasion for us to recognize a very important moment in Greenville’s history when one of the most important Americans this nation has ever produced came and spoke at one of our churches,” said Kevin Pearcey, director of the Greenville-Butler County Public Library.

Pearcey stumbled across the photo earlier this year while preparing a Civil Rights exhibit that was displayed at the library during Black History Month.

The photo, which was taken by Jim Peppler, a photographer with the Southern Courier, became the centerpiece of the exhibit.

It also shed light on the role Greenville played in the Civil Rights movement.

“Oftentimes, when discussing the Civil Rights movement, we talk about Selma, Birmingham, Montgomery — all important places — but it’s also important to realize that this was a very real struggle that happened in small towns like Greenville across the south,” Pearcey said.

Greenville Mayor Dexter McLendon, who visited the exhibit at the library, was shocked to learn that King had visited the Camellia City.

“I’ve been living here since 1959,” he said. “I’ve never heard that (King visited the city). I’m getting chill bumps right now, but I got chill bumps that day.”

After seeing the photo, and hearing the story from Pearcey, McLendon visited with members of Harrison Street Missionary Baptist Church.

“To be honest, I had never visited the church,” McLendon said. “But I walked in there and I saw the pulpit. It’s the same pulpit in the picture. I got some more chill bumps. … It’s important for these kids and the community to know about this story that I didn’t know about. I believe 99 percent of the people in this town don’t know about it. We need to take this moment, go back and listen to what this great American was saying. Because in this country, right now, we’re not doing what he said.”

In order to make sure as many people as possible are able to see the photo, it will rotate between the schools, the Butler County Courthouse, City Hall and the library before being displayed at the annual MLK Breakfast. After the breakfast it will be given to Harrison Street Baptist Church.

“What divided us in 1965 is bringing us together now,” Daniels said. “The message that Dr. King preached — one of love and unity — still resonates in society. It’s still important. That’s what it’s going to take in order for us to come together and for us to survive as a people. I thank Mayor McLendon for his stance and for doing what he’s done today because we don’t have a black Greenville. We don’t have a white Greenville. We have a Greenville.”

Barry Grace, chairman of deacons at Harrison Street Missionary Baptist Church, was on hand to accept the photo on behalf of the church.