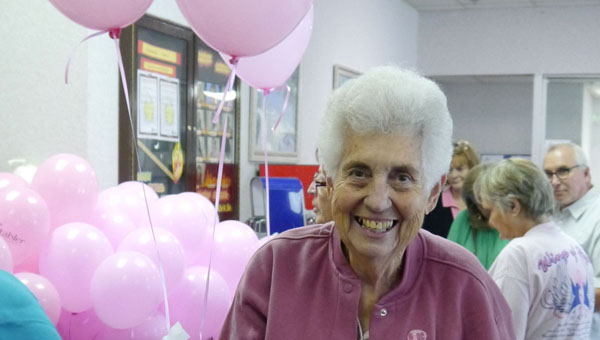 One January day 15 years ago, Jeannie Smith got her first look into the eyes of cancer.

“My mother was diagnosed with breast cancer in January of 2000. When I looked into her eyes, I saw they were filled with so much fear and worry,” Smith said.

Smith said she was at her mother’s side throughout her all-too-brief 18-month cancer battle, right up to the time of her last and most important appointment, “her meeting with Jesus.”

“We looked into each other’s eyes without saying a word and I held her close. I became a cancer survivor on that day,” Smith said.

Because of her mother’s involvement with the ACS, Smith became familiar with its programs such as Reach for Recovery and Birmingham’s Hope Lodge, where her mother, and later, her father, stayed while undergoing cancer treatments.

After losing her mother to cancer, Smith went on a mission to fight back against the cancer foe in memory of her mom.

“I stayed informed and up-to-date on cancer research through the ACS’s website and I poured myself into participating in the annual Relay For Life,” Smith said, adding, “I had a constant fear that breast cancer would happen to me, too. At times it totally consumed me.”

Even though her routine mammograms from the age 25 onward were always clear, knowing that she had a 50 percent chance of carrying the BRCA1 gene never was far from Smith’s thoughts.

“Once I finally had the blood test done and found out I was a carrier,  I knew I wanted my breasts gone to remove that fear,” she said.

In September of 2104, Smith had her first breast MRI.

“The radiologist contacted me and said I would have to undergo a biopsy,” she said. “There was a tumor in my left breast. Due to its density, it was never detected by the mammograms. And all those memories of my mother came rushing back to me. Would my three children be surrounding my bed and looking into the glazed eyes of cancer?”

Faith and knowledge were Smith’s watchwords for her own cancer battle.

“God dipped me in a pool of peace and going to cancer.org gave me knowledge, and knowledge is power,” she stressed. “We caught my cancer early, and early breast cancer, before it moves to other organs, is highly treatable. This is why the research that the ACS supports is so important — finding out how to stop the cancer from spreading.”

Later this month, Smith will celebrate the one-year anniversary of the removal of her breasts and their reconstruction. After the surgery, doctors felt a course of chemotherapy would best work for her.

And that meant adjust to the loss of her long blonde locks.

“We made a party of it, used the clippers and shaved my head. My youngest mowed right down the middle of my head,” Smith said with a grin. “Cancer is a terrible thing, but you have to be able to laugh along the way, too.”

The  ACS’s “Look Good, Feel Better” classes taught Smith and fellow breast cancer patients how to apply makeup to help downplay the effects of the treatments, a variety of ways to tie scarves and other tips.

“It’s a program that really boosts your confidence when are walking around with no hair and no eyebrows,” Smith said.

Pantene’s Beautiful Lengths supplied her with a human hair wig.

Normally, Smith said, a real human hair wig will cost as much as $1,000, but through Pantene’s program, cancer patients can get one free.

“My two little girls have donated 30 inches of hair between them to this program to help other people like their mom,” Smith said with a  proud smile.

There’s no denying that the statistics are daunting.

“One out of eight women will hear the words, ‘You have breast cancer.’ For women with the BRCA gene, it’s nine out of 10. Will it be your mother, sister, grandmother, daughter — or will you be the one your family looks at when they look into the eyes of cancer?” Smith queried.

Faith, knowledge — and the support of family and friends — can make all the difference, Smith said.

“My daughters were recently running their fingers through my now short, curly brunette locks, and we all sang together, ‘This is my fight song, take back my life song  . . . and I’ve still got a lot of fight left in me,’” she said, adding,“Will you join the fight?”

Following Smith’s speech, the breast cancer survivors and caregivers present tied the names of those they were honoring or remembering to pink balloons, the signature color for breast cancer awareness. Forming a circle outside, they released the balloons and watched them soar up into the stratosphere as they celebrated another day of “taking back our lives.”