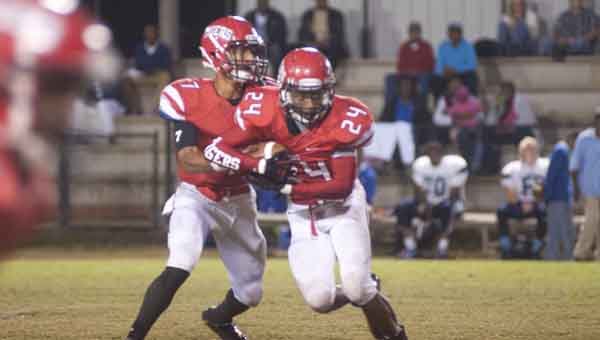 Quarterback Austin Bryant (7) hands off the ball to Tyrus Jones.

Luverne celebrated homecoming with a decisive win over the Calhoun Tigers, 56-8.

Quarterback Austin Bryant put Luverne on the board with a 32-yard touchdown run. An unsuccessful kick left the score at 6-0. Bryant also had an interception during the first quarter.

Junior Blake Weaer intercepted a Calhoun pass in the first few seconds of the second quarter and Tyrus Jones added a 16-yard touchdown run to the Luverne score.

Calhoun scored early in the third quarter with an 82-yard touchdown. A successful two-point conversion brought the score to 27-8 with 10:44 left on the clock.

Tyrus Jones ran in the next touchdown and Marcus McGhee’s 15-yard touchdown run brought the score up to 40-8.

With 7:25 left in the fourth quarter, Dannie Lowery, Cody Gulledge and Christohoper White converged for a safety bringing the score to 49-8.

A 16-yard pass from Dionte’ Brantley to Darius Upshaw brought the score up to 55-8. A successful kick gave the Luverne Tigers a final score of 56-8.