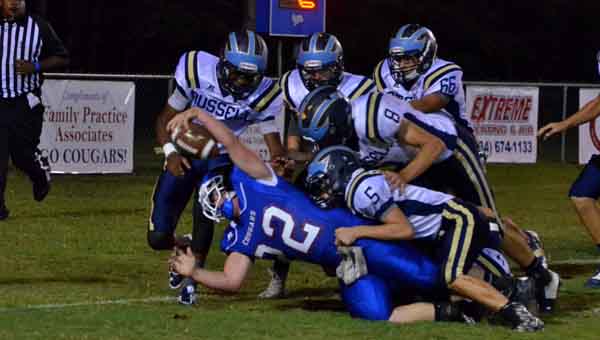 CONTRIBUTED PHOTO | MERICA TISDALE
Crenshaw’s Cole Roper reaches for the ball as a horde of Russell Christian players pile on him.

After last week’s 37-8 defeat of Russell Christian, Crenshaw Christian is ready to shake things up for region play.

“This week’s game will determine the No. 2 seed in our region. We really need to win this one,” said head coach Dean Briggs.

Briggs focused on Chambers during this week’s practices.

“They’re a very good football team,” he said. “They run the ball a lot and throw it very little. They’ve got a lot of speed and have been scoring a lot of points.”

After racking up several penalties against Russell, Briggs stressed to his team that the mistakes could be critical in this week’s game.

At this week’s practices, the Cougars added a few more offensive moves to their arsenal. The team also worked on executing their plays. Briggs said he felt good about their chances of winning against Chamber.

The team took last week’s homecoming game in stride. They completed 300 yards of offense. Cole Roper had 144 yards rushing with 20 carries. On the other side of the ball, Colten Kelley had 13 tackles.

Briggs said he was very proud of the entire team.

“It took everyone to win this one,” he said. “They played well on all phases of the game … defense, special teams and offense all contributed.”