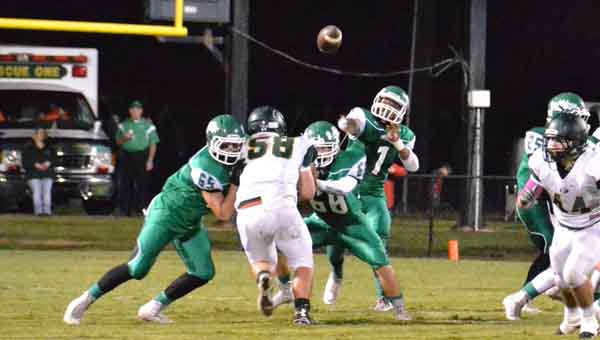 “A lot of our young guys got to play who hadn’t played in a varsity game all season,” he said. “It was just a good night.”

The Bulldogs have spent this week preparing for this week’s homecoming game against Barbour County.

“Homecoming is always hard on coaches. It’s a tough week to get the kids focused,” Kilcrease said.

The Bulldogs have stepped up their game in the last few weeks, impressing Kilcrease with hard work and strong effort.

“I said from the very beginning, I thought we’d be good by the end of the year and that statement has turned out to be true,” he said. “We’ve improved our work ethic and have just improved overall.”

The team’s productive practices have the Bulldogs in great shape for this week’s game.

“Barbour County hasn’t won a game, but they played some stiff competition. Two of the teams they faced are undefeated,” Kilcrease said.

The Bulldogs will wrap up region play after games with McKenzie next week and Pleasant Home the following week.

“McKenzie will decide who gets second in the region,” Kilcrease said. “But we’re just trying to focus on one game at a time and get through this week with Barbour County.”