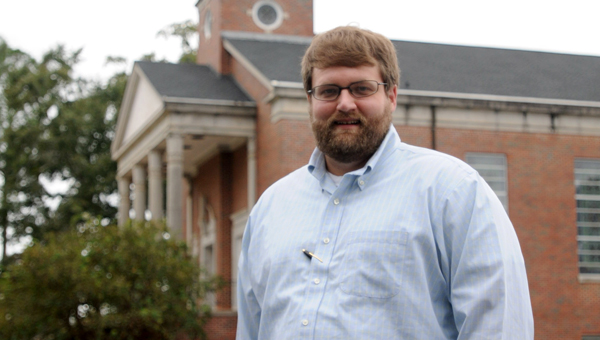 While many of Chase Clower’s fellow Charles Henderson High School graduates were trying to figure out just what they wanted to do with their lives, the Troy, Ala., native already had the answer.

He was going into full-time ministry.

“I surrendered to God’s call to ministry my senior year of high school,” Clower said.

Once he accepted the call, Clower, the new senior pastor at First Baptist Church in Greenville, jumped right in. He was active in the Baptist Campus Ministries at Troy University as a student, and even served as interim youth pastor at his home church, Southside Baptist Church in Troy, during his sophomore year of college.

“That’s sort of where ministry began for me,” Clower said. “I learned lesson planning and how to teach and communicate. There are some unique things with communicating with youth and adults, but that was just the first experience for me in doing ministry. I had the chance to teach and serve and it led me to more of a desire to work with adults and teach and preach.”

For five years, while he attended New Orleans Baptist Theological Seminary, Clower served as pastor of Henderson Baptist Church in Goshen. After graduating from seminary, he went on to become associate pastor of First Baptist Church in Brewton,  where his focus was educational ministry. While in Brewton, he had the chance to serve under senior pastor Jack Fitts, who Clower describes as a mentor.

“One of the biggest benefits of being at First Baptist in Brewton was that I was able to observe (Fitts),” Clower said. “That was one of my goals when I went. I wanted to see how he did things and learn from him and experience a little larger church environment.”

Clower will now apply the lessons he learned in Brewton at his new church.

The key, according to Clower, is to create a culture of discipleship at the church.

“My ministry philosophy is relationship driven,” he said. “We have to build a culture of discipleship in the body of Christ. It’s all centered on our relationship with Christ and nurturing that relationship and then taking it and pouring it into others.”

This past Sunday was Clower’s first at First Baptist Church Greenville.