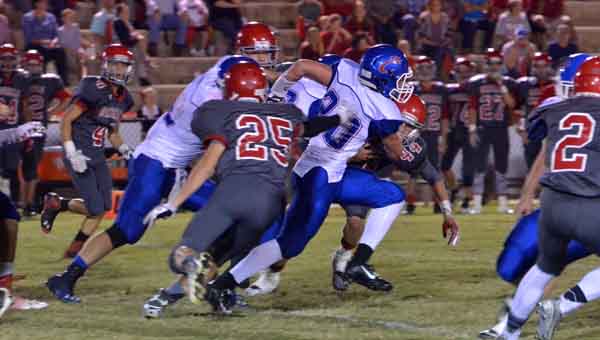 Crenshaw Christian Academy are ready to dust themselves off from two disappointing losses. After losing to 3A champions Escambia, Crenshaw experienced a 60-12 defeat to 1A reigning champions Abbeville Christian.

The Cougars expected an uphill battle. In addition to a large returning senior class, Abbeville picked up several Ashford Academy players after the school closed.

There were a few bright spots Friday night. Spencer Floyd returned a 70-yard kickoff return for a touchdown. Cole Roper, who played quarterback and running back, was also good for a touchdown.

On the defensive side, Collin Holloway led in tackles and Preston Worley had a sack. Colten Kelley broke up a key Abbeville pass.

Crenshaw will return home this week, after several games on the road. It is homecoming week and Briggs said the team is excited.

They will face Russell Christian Academy, a team new to AISA out of Meridian, Miss.

“They’ve been around two or three years,” Briggs said. “They run a wing T offense and like to run the football.”

Like the Cougars, Russell stands at 1-4 for the season and Briggs expects the teams to be evenly matched.

“One thing that has impressed me is they’re a defensive-minded team,” Briggs said. “They play really hard and fast.”

The Cougars plan to do the same. Kickoff is at 7 p.m.

Crenshaw County strays at the heart of online uproar (PHOTOS)