Crenshaw County strays at the heart of online uproar (PHOTOS) 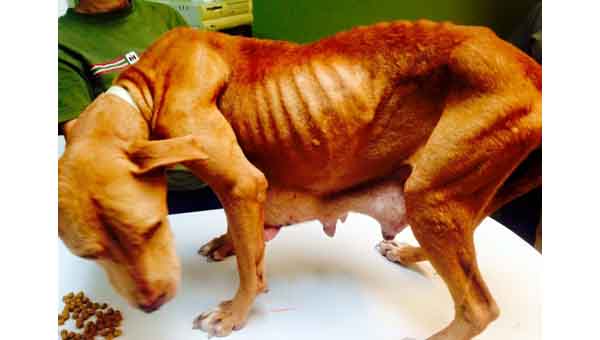 Glenda is one of three Crenshaw County stray dogs that were rescued last week.

Three emaciated Crenshaw County strays have found refuge thousands of miles away. In the process, Amelia Dale, Peaches and Glenda have put Luverne on the map – and not in a good way.

The dogs came to Animal Tails Rescue in different ways. Amelia Dale was found hanging around a local family’s yard. In addition to being malnourished, she had a gash on her leg so deep, her femur was visible.

Glenda was found in Glenwood where she had passed out in the roadway. When ATR volunteer Sandra Kilpatrick was called to the scene, there was no way she could leave the dog without helping.

“She was an extreme case. We did not have a pen open. I took her and put her in a kennel at my own home,” she said. “The dog was so emaciated she could not stand.”

Glenda also had mastitis, a bacterial infection of the mammary glands. She had recently given birth, but the pups were never found.

Peaches was another special case. She was one of five dogs a Highland Home resident had rescued. Overwhelmed by the sudden responsibilities of caring for so many animals, the resident contacted ATR.

Peaches’ condition fueled uproar online as speculation quickly grew into unsubstantiated tales that a person had raped her.

Peaches was found with a vaginal prolapse.

“In vaginal prolapse, an inch or two of the vaginal walls can be seen outside of the body,” Gammage said. “Nobody knows how it happened. But the three most common causes are dystocia, tenesmus and interruption of intercourse between a male and female dog.”

Dystocia is a difficult or abnormal birthing experience. Tenesmus is severe constipation.

Gammage said there was no evidence that a human being had caused Peaches’ condition. Unfortunately, neither Rescue Dogs Rock NYC nor WSFA contacted Gammage before posting that Peaches might have been raped.

“They certainly have helped some of the animals from our area,” Kilpatrick said of the organization.

In a Facebook post, Rescue Dogs Rock NYC posted graphic photos of Peaches and said she was the victim of a “vile and cruel” act.

“Peaches was raped! Yes, you heard that correctly,” the post said. “This young female pit bull was found on the streets of Luverne, AL with, as finder said, ‘all her business hanging out.’ … this sickening, vile and cruel act was done by a so-called human.”

The post appealed to Luverne residents to report who committed the alleged act to the authorities. In the last week, neither the Luverne Police Department nor the Crenshaw County Sheriff’s Office has received any reports of animal cruelty or abuse.

As of Tuesday night, the post had been shared by more than 900 people and been picked up by other websites like examiner.com. It also led to WSFA’s report on the possible “rape” of a dog in Luverne.

“Animal Tails Rescue did not say Peaches had been raped. It did not come from us,” Kilpatrick said. “I posted exactly what I was told at the vet. The word ‘rape’ and the word ‘sodomize’ were not used.”

Glenda and Amelia Dale have become overnight celebrities, too. Although Gammage has said there was no evidence any of the dogs were involved in dog fighting, Hendrick & Co. has made a meme of Amelia Dale’s open wound with the message, “Share if you are against dog fighting.” More than 4,200 people have done just that.

According to hendrickboards.com, “it is suspected the dog may have been used as a ‘bait dog’; dogs and small animals used as practice for fighting dogs.” More than 2,000 people have shared Amelia Dale’s story.

There is no denying Peaches, Glenda and Amelia Dale were abused, Kilpatrick said.

“They were starving; they were emaciated; they were on death’s door,” she said.

The trio were among the worst Animal Tails Rescue have found in Crenshaw County, but there have been many others.

“Animal Tails Rescue is only working for the benefit of the animals in this county,” Kilpatrick said. “We just want them to be safe, want them to be fed, want them to have shelter and want to help control the pet population by having them spayed or neutered.” 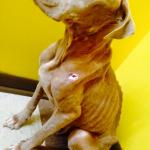 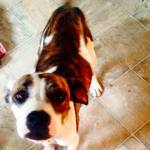 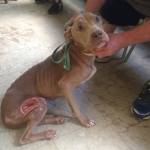