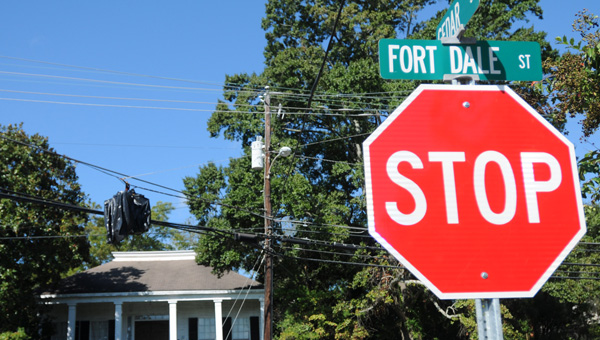 City officials have made the decision to alter the traffic pattern at the intersection of Fort Dale Street and Cedar Street due to the cost of replacing a malfunctioning traffic light. Fort Dale Road will no be a through street, while drivers on Cedar Street will come to stop until traffic is clear. (Advocate Staff/Andy Brown)

Drivers heading to or from downtown Greenville may have noticed a recent change in the traffic flow at the intersection of Fort Dale Street and Cedar Street.

A traffic light that once controlled the flow of traffic at the intersection is no longer operational. City officials learned on Friday that it would cost $15,000 to $20,000 to replace the light.

Rather than take that route, officials have elected to change Fort Dale Street to a through street and install a stop sign on Cedar Street.

“We feel that traffic will work just fine like this,” said Greenville Police Chief Lonzo Ingram. “It’s just something that people will have to get accustomed to.”

This is not the first time the city has chosen to do without a traffic light at the intersection. Ingram said in the mid to late 1980s, the traffic light was removed for a brief period.

“It was taken down to see how traffic would flow,” he said. “At the time, with First National Bank on the corner, there was too much traffic coming from both ways, and the light was needed to help with the traffic flow. Now with the bank gone, we think this is going to work just fine.”

With the intersection being near to W.O. Parmer Elementary School, Ingram said that the police department will place officers at the intersection at the start of the next school year to aid with traffic flow.

“Traffic is always an issue the first few days of the school year, so we’ll have an officer here to help make sure things flow smoothly,” he said. “The biggest thing is we just need everyone to be mindful of the change and exercise a little extra caution as they get used to the change.”