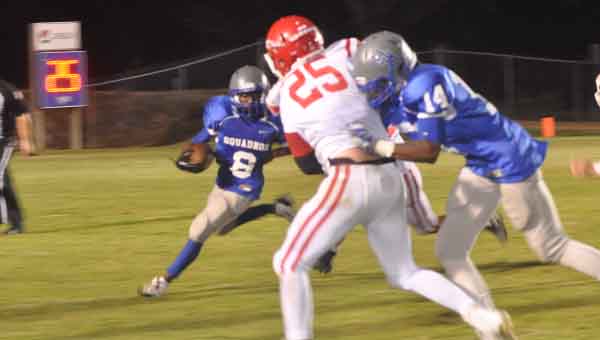 “Offensively, by far, this was the best night we’ve had,” said head coach Gregg Baker. “I’m proud of that.”

The team ended the first quarter with a score of 13-0, but Zion Chapel got on the scoreboard in the second quarter with a touchdown pass seven minutes before halftime.

With five minutes left in the first half, Highland Home quarterback Chase Mansmann threw a 43-yard pass to Kirkland Merriweather. The two-point conversion pass was good, bringing the score to 21-7.

Zion Chapel quarterback Justin Mobley answered with a 78-yard touchdown pass. The kick was good, bringing the score to 21-14.

A 44-yard touchdown run brought the score up to 21-20. Zion Chapel tied the Squadron with a good kick.

Another Mansmann/Merriweather touchdown pass brought Highland Home back into the lead. The team went into halftime with a score of 28-21, but that only lasted as long as the break.

Merriweather scored with a 91-yard touchdown return to start the second half.

Zion Chapel’s four-yard touchdown run brought the score up to 34-28.

With 5:20 on the clock, Mansmann threw a 16-yard touchdown pass to Clay Hobbs.

“We played well on both sides of the ball tonight,” Hobbs said after the game.

Two minutes later, defensive lineman Kenny Blair had his chance at a touchdown after a fumble recovery. “I thought I was going to get it, but let them get the best of me,” he said after the game. “Next game, I’ll try a little harder and maybe I’ll get that touchdown.”

Early in the fourth quarter, Zion Chapel made a three-yard touchdown run. A good kick brought the score to 41-35.

An interception by Mansmann sealed the deal, putting the Squadron back in control and lining them up for a final 40-yard touchdown.

“We gave up way more points than I’d like to have,” Baker said. “But, I saw some improvement upfront on the offensive line. Chase Mansmann, Brandon Strength and Kirk Merriweather shared the ball. When they start spreading the rock around, it’s a good thing.”

The Squadron will travel to Brantley this week. Baker said he grew up in Brantley and had great memories of that field.

“I know they’re good and it’s going to be great to go back there and coach there Friday night,” he said.