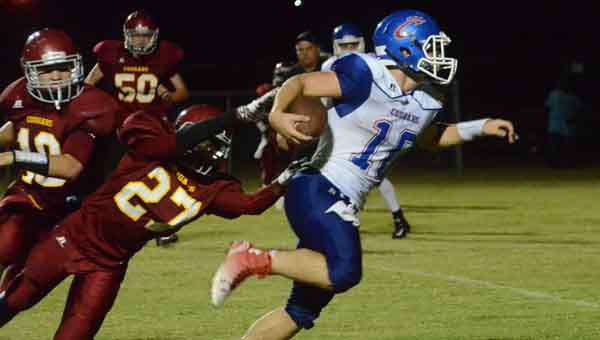 Pay no mind to the final 35-13 score; it doesn’t take under consideration that the 1A Cougars took on defending 3A state champions Escambia Academy and lived to tell the tale.

Head coach Dean Briggs said playing a powerhouse could only strengthen his team.

“It helps them understand how people execute and forces us into better execution. It also helps us with speed,” he said.

Britt Kelley, also a senior, made two touchdowns, running one in and catching a pass for six more points. Kelley put Crenshaw on the board early in the third quarter, and again in the fourth.

“We played better all the way around,” Briggs said. “We seem to be evolving into a running team. We had 132 yards rushing, which I was pleased with.”

The Cougars travel to Abbeville Friday for regional play.

Cole Roper is expected to return full-strength this week. He was on limited play last week after injuring his ankle three weeks ago.

The Cougars have been working to improve tackling skills in order to keep Abbeville in check.

“They like to throw the football and have a running quarterback,” he said. “They also have a couple of wide receivers who are good and really fast. We need to be able to contain the edges on this team.”