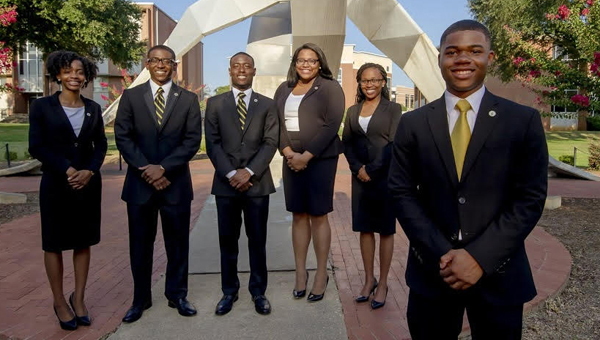 Jeremy Crum, a 2011 graduate of Keith High School and a senior at ASU, was elected SGA president at Alabama State in April and took office in May. (Courtesy Photo)

A Selma and Dallas County native was sworn into office Wednesday as president of the Student Government Association for Alabama State University.

Jeremy Crum, a 2011 graduate of Keith High School and a senior at ASU, was elected president in April and took office in May. Crum is the son of Harry and Samantha Crum, both Greenville natives, and the grandson of Dorothy Crum and the late Jimmy Lee Crum, a longtime Butler County commissioner, and McArthur and Jeannie Taylor, all of Greenville.

With the new school year under way, the school will officially swear in Crum and five other SGA officers.

“I’m very honored,” Crum said of position. “I think it is definitely going to give me a chance to help a lot of students and help make a lot of effective changes here on the campus, so I’m very excited and just very honored to have the position.”

Crum said he is proud to represent Selma and Dallas County.

“It really shows people that no matter where you come from or what high school you graduate from that you can go out and accomplish big time things,” Crum said. “I graduated from Keith High School, and we didn’t have the best books or some of the best supplies or materials, but I didn’t let that hinder me from going out and following my dreams.”

The ceremony will be at 7:30 p.m. at the John Garrick Hardy Student Center’s Amphitheater.

“I and five others will be sworn in, and basically this is a time for me to highlight some of my future plans and some of the things that I’ve already accomplished since I took office,” Crum said. “Basically, it is a state of the association address. I get to tell the student body my vision.”

As president, Crum said he has already accomplished some of his goals since May.

“We won the Commissioner’s Cup, and we had eight athletic teams that won SWAC championships, and the Crum administration took the initiative to honor all eight of those teams on the first day that we took office,” Crum said. “We’ve engaged in several fundraisers from May 1 until now, and we’ve raised over $3,000. The money that we raised will be used to give scholarships to students that are struggling financially.”

Crum said his administration is also working to start a recruitment committee to go to area schools and recruit local students to encourage them to attend Alabama State.

“I really never had aspirations of serving as SGA president. Me and my cousin talked about it before, but I never really put any deep thought into it,” Crum said. “My junior year came around, and I was supposed to run that year, and it ended up not happening.”

Crum said he had a lot of people that helped him get elected, including his girlfriend, Lanisha Snow, who served as his campaign manager.

“I’m thoroughly enjoying my time here in office, and I’m extremely proud to say that a small town boy from Selma is the SGA president at Alabama State University,” Crum said. “I never thought this would have happened in a million years.”