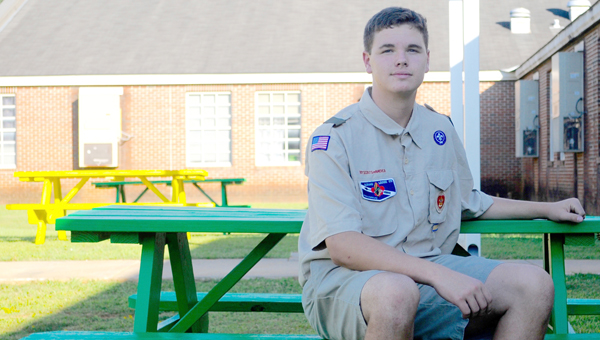 Pryor currently holds the office of assistant patrol leader in Troop 520. As part of the requirements to earn the Eagle Scout badge, he and his troop were responsible for organizing, gathering materials and completing a community improvement project.

The troop constructed and painted six picnic tables for the break area behind W.O. Parmer Elementary School, as well as added a few trashcans to enhance the cleanliness of the campus grounds.

“I remember being here,” said Pryor. “I remember sitting here on the grass and mom would be annoyed because I would get my pants all dirty from sitting on the ground. Before we put trashcans here, there was trash everywhere because people would just throw their trash on the ground. So, we decided to help them out.”

Funds for this project were donated by the Butler County Board of Education and W.O. Parmer Elementary School. Pryor says that without these generous donations, he and his troop would still be trying to find ways to finance this project. He also thanks the FUMC for their help and support in sponsoring Troop 520.

In order to receive an Eagle Scout badge, there are many different tasks that must first be completed. According to the Boy Scouts of America website, scouts must progress through all six ranks of scouting before reaching the highest rank of Eagle Scout. They must also earn 21 merit badges, which can be done by completing activities such as first aid, citizenship in the community, camping, emergency preparedness or lifesaving, hiking and swimming. Scouts must also serve six months in a leadership role in the troop, take part in a Scoutmaster conference, successfully complete an Eagle Scout board of review and plan, develop and organize a leadership project. This project must help the troop, a religious organization or the community. Since it was first awarded in 1912, more than two million young men have achieved the rank of Eagle Scout.

Pryor, who lacks only the board review before earning the rank of Eagle Scout, started with the Scouts when he was in first grade; at the time, his classification was Cub Scout. This year marks his tenth with the troop. Pryor first became interested in scouting because of his father.

“My dad was my leader for Tiger and Wolves, and he really got me interested in it,” said  Pryor. “I couldn’t have done any of this without him.”

Pryor has enjoyed his time as a Scout and is thankful for the many friends he has made by joining. It is his hope that he and his troop will be able to continue helping the community with various projects and needs.