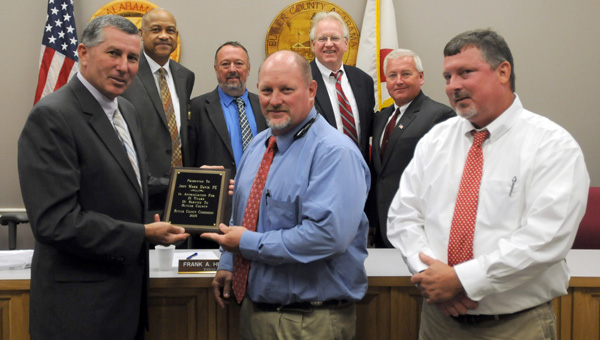 John Mark Davis has been described by some of those who know him best as a man of few words.

On Monday, Davis found words even harder to come by as the Butler County Commission recognized the Greenville native for nearly 21 years of service as assistant engineer with the county’s Road Department. Davis recently accepted a position with Autauga County as its engineer.

“It’s hard to put into words what I’m feeling,” Davis said. “I’ve really enjoyed working (at the Road Department). The experience of being a part of this community and working somewhere that you grew up was special.”

Butler County Engineer Dennis McCall said Davis has been a “tremendous asset” to the county and will be greatly missed.

“John Mark is a highly competent professional engineer whose talents are widely recognized throughout this state,” said McCall. “This career move will be a big adjustment for both of us. I have mixed feelings, but am excited for John Mark and his family.”

During his tenure with the Butler County Road Department, Davis oversaw the design and construction of more than $20 million of road resurfacing and bridge replacement projects.

On Monday, the commission presented Davis with a plaque and also passed a resolution honoring Davis for his years of service to the county.

Josh McDougald has been hired to replace Davis as the assistant engineer.

McDougald, a graduate of Auburn University, has worked in the engineering departments for both Chambers and Lee Counties.

“Josh has a lot of county related experience and he’s already very well respected and is coming in with a very good reputation,” McCall said. “I know he will do well.”