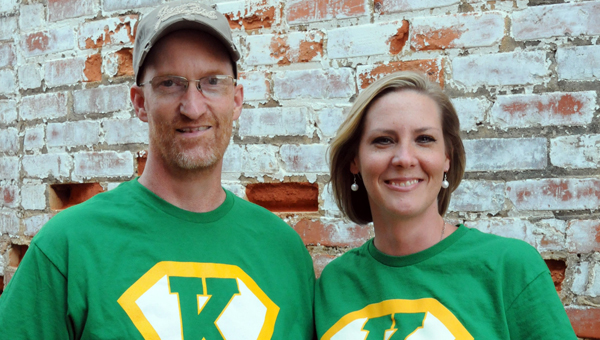 Vicki Russell gave her uncle Jerry Burt new life through a kidney donation. The two said through the process they’ve grown closer as a family, but they have also grown closer to God. (Advocate Staff/Tracy Salter)

In 2007, Jerry Burt visited his physician for a routine checkup. What he found was something he never would have expected.

His creatinine level at the time was high, indicating that he was in stage one of kidney failure. It was at this time that he began seeing a nephrologist — a kidney specialist.

Over the next five years, his creatinine level steadily continued to climb. In the years 2012 to 2015 it rose dramatically to 10.7. At this point, Burt was past stage five of kidney failure and was forced to examine options of treatment.

He was given three options for his situation: dialysis for the rest of his life, in home dialysis or a kidney transplant. He began dialysis treatments and continued this for about a month. In the meantime, Burt’s family members began to test themselves to see who was and was not a positive kidney match.

Three of Burt’s family members were tested; only one was a positive match — his niece, Vicki Russell.

“I can remember leaving there one day and I did not want any of it. I couldn’t even imagine having a kidney transplant. But as it rolled on, God gave me a peace about it, doors began to open and Vicki came forward and was a match,” Burt said.

Burt found out that his niece was a positive match while he was receiving his dialysis treatments.

There was no doubt in Russell’s mind that she was the one called to donate to her uncle.

“Obviously, he’s family but I felt like it was something I had to do. From the moment I found out that he needed to have a kidney transplant, I just knew it had to be me,” said Russell.

While there were not many physical preparations the pair had to undergo for the operation, both took time emotionally and spiritually preparing. The surgery took place on July 27, 2015.

Kidney transplants are often more strenuous on the donor than on the one receiving the kidney. This proved to be very true for Russell.

“The way the doctor described it is that, he (Burt) was sick and I was well. By taking my good kidney and giving it to him, he is automatically well, and now I am sick,” said Russell.

After a long recovery process, both Burt and Russell are ready to get back into the swing of their daily lives. While the experience has been stressful and tiring, both have gained insight and knowledge from the experience. Not only have they grown closer as a family, but they have also grown closer to God. Russell and Burt were always confident of the love and support their community and church offered them and are grateful to all of those who supported them. Both have found that they were able to handle more than they ever thought possible.

Burt is still in the process of recovery but has made great strides. His medication count has been cut in half and he hopes to return to work in the next few months; he looks forward to all of the advantages that come with his newly gained wellness.

Burt is immensely thankful for the donation from his niece. He will forever be grateful for her gift, and gives the credit for the successful surgery and recovery to God.