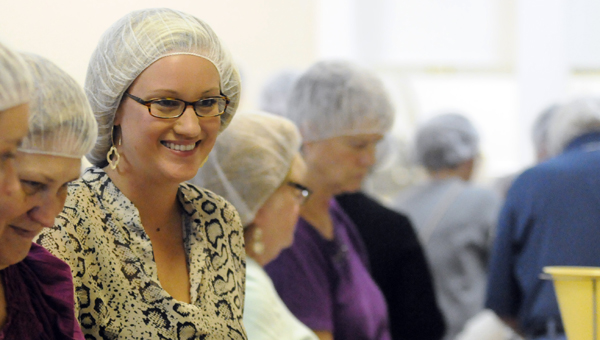 Volunteers at First United Methodist Church in Greenville are doing their part to put a stop to hunger.

FUMC pastor David Saliba was encouraged by the number of volunteers that chipped in to make the packing event such a success.

“We had volunteers from 5 years old to 90 years old,” he said. They packaged and boxed for shipping 10,800 meals in 55 minutes.  “That makes 31,750 meals that we have bought the food for, packaged and shipped to people in need since we partnered with Stop Hunger Now in September of 2014.”

During a packing event, volunteers set up and take down packaging stations and equipment, fill bins with raw ingredients, scoop ingredients into meal bags, weigh and seal the bags, box and stack them on pallets, and load the pallets and equipment onto a truck.

Since its founding in 1998, Stop Hunger Now has provided more than 180 million meals in 65 countries. This year, the organization, which is committed to ending world hunger, expected to package 45 million meals and ship more than $9 million in donated aid, mainly vitamins and medical supplies.

The organization was founded by Ray Buchanan, an ordained United Methodist minister with the vision of ending hunger in his lifetime.

“Because of (the connection to the United Methodist Church), ever since it’s beginning a lot of United Methodist Churches have been involved,” Saliba said. “On a whole, we only like to partner with international ministries when we know how our resources will be delivered and managed. We only participate in feeding ministries when we know that partnerships are created to holistically address the needs of the people the ministry is serving.  Stop Hunger Now delivers food to places where ministries are firmly established and physical, emotional, and spiritual needs are met in a way that truly empowers a people in need to live a better life.”

Saliba said the church plans to hold another packing event in the spring.