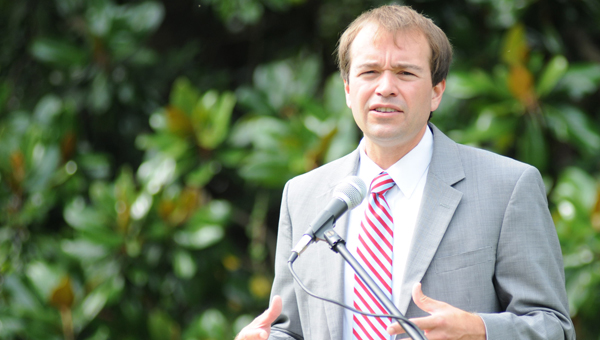 Citizens of Greenville gathered in Confederate Park on Friday to remember the sacrifices made on Sept.11, 2001.

Veterans, the Greenville High School band and ROTC members, Mayor Dexter McLendon and many others came together to honor the memory of those who died as a result of the attacks 14 years ago.

“To me this is one of the most important days of the year,” McLendon said. “I don’t want us to forget. I don’t think any of us will ever forget where we were that day. I know I won’t. It changed things.”

Rebecca Butts, event coordinator, wanted to have an event like this to showcase the members in the town who bravely serve, as well as to remember the historic events of September 11.

“As our own community in Greenville, we’re blessed with men and women that protect and serve us each and every day. Why not have a day of remembrance and show some appreciation to them,” said Butts.

The GHS band performed classic patriotic pieces, while the ROTC presented the colors. David Saliba, pastor of First United Methodist Church, served as the keynote speaker for this event. His message was one of unity and of working together to accomplish something that alone would be impossible. He addressed the popular question that so many asked after witnessing this travesty, “Why? Why did this happen to us?” Rather than focusing on this question, however, Saliba challenged the crowd with a different question, “How?”

His question was instead, how could God’s hand been seen in events such as 9/11?

“I do think that God worked good, even out of this day,” Saliba said. “This day that was filled with terror and tragedy, I believe that God did find a way to show us, and the whole world, that there is something redeeming and something good that can come out of it. I believe that was our unity.

“Since the attack on the World Trade Centers, Americans have banned together to show a more united front. These attacks may have weakened us significantly, but the unity and comradery that developed from it was greater than we ever could have imagined.

Just as each part of the body works together for the good of the whole, so too must we as a nation work together. I think what happened after Sept. 11 is we saw that victory can only be won when we are actually united, when we do come together as one body.”

Saliba encouraged all to take up the challenge set forth and to unite with those in their community. He believes that the men and women who served in the Trade Center bombing showed the greatest example of servant leadership, putting others first before considering their own safety.

On historic days like these, it is important to not only look to the past in reverence, but to look to the future with hope.

“As far as I’m concerned, in my lifetime, that is a day that I will never forget. It brings you together as Americans,” said McLendon.