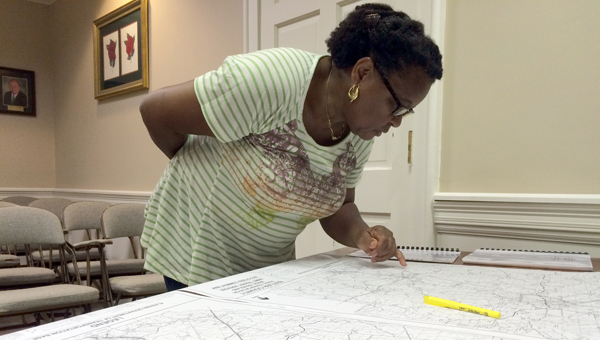 The meeting was the fifth of six meetings held in Butler, Bullock, Crenshaw, Lowndes, Macon and Pike Counties. The aim of the meetings is to create a rural transportation stakeholder organization with the purpose of establishing a continuous and on-going rural transportation planning process that will aid in the identification of transportation needs and issues of nonmetropolitan areas of the South Central Alabama Region.

“We want to know the specific issues in the region,” said SCADC’s Sharri Miller. “Residents ride these roads every day and will notice things that we don’t see as non-residents. This is a chance for the public’s voice to be heard and to provide us with valuable information.”

The SCADC collects the feedback and compiles a report annually that it then submits to the Alabama Department of Transportation. Miller said the information is also often shared with county engineers.

“We have noticed that some roads identified in the past have been addressed, Miller said.

Easter Smith, who attended Thursday’s meeting, is hoping that Rocky Street and Rocky Lane in Georgiana soon receive some attention.

She said the roads are narrow, wide enough at some points for just a single vehicle, and that overgrown tree branches limit visibility. She said there’s also a need for a stop sign where Rocky Lane and Rocky Street intersect.

“My biggest concern is that the school bus does come down the road,” Smith said. “On Rocky Lane when you come up from Rocky Street there’s no stop sign. I think there needs to be a stop sign or something there to slow people down.”

Miller said that Rocky Lane and Rocky Street were mentioned in last year’s report as well.

“It’s a road that’s high on the critical list,” she said. “Last year they mentioned flooding and a need to widen the road. They also mentioned that at times due to rain and flooding the school buses can’t get in and out of the area.”

Miller said she would request that someone with the Department of Transportation come and take a look at the roads.

“I’ll let them know that we need someone to come and take a look,” she said.

Miller said the SCADC’s report will be submitted to the Department of Transportation by October.