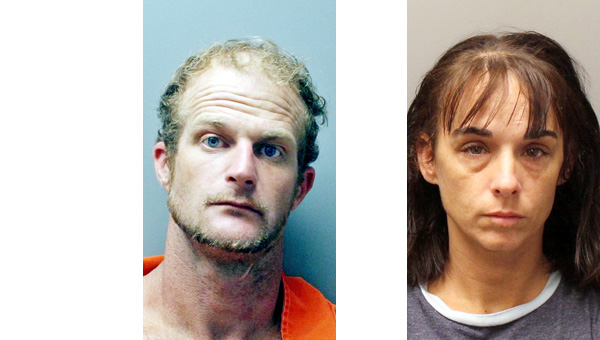 Tidwell (left) and Lowe were arrested after a traffic stop Monday.

Troy Police arrested two individuals at a traffic stop at the 1600 block of U.S. Highway 87 at approximately 3:20 a.m. Monday.

Jeremy Tidwell, 32, and Tiffany Lowe, 35, of Crenshaw County were arrested and charged with manufacturing drugs first degree and possession of drug paraphernalia.

Officers responded to the 900 block of Pike County Lake Road when a caller reported a suspicious two-door red Honda. When they observed the vehicle, they ran the license tag and realized the tag had been switched with another vehicle.

Officers initiated a traffic stop and stopped a vehicle that also had a switched tag.

“They initiated a traffic stop,” said Lt. Brian Weed, public information officer with the Troy Police Department. “A Ford vehicle came to a stop, and officers observed the passenger door open up and a bottle was thrown from the vehicle.”

Tidwell and Lowe were detained at the traffic stop when officers discovered drug paraphernalia in and outside the vehicle.

“In plain view were syringes and another type of paraphernalia with a white powdery substance on them,” Weed said.

Officers examined the bottle thrown from the vehicle, and it was what is known as a “shake and bake,” which is used for manufacturing methamphetamine.

The narcotics detective came to the scene to test the substance in the bottle. The test came back positive for methamphetamine.

“They were in the process of making methamphetamine,” Weed said.

Tidwell and Lowe were charged with manufacturing first degree and possession of drug paraphernalia. Bond is set for $50,000 for each.

Both were processed at the Troy City Jail and transferred to the Pike County Jail.