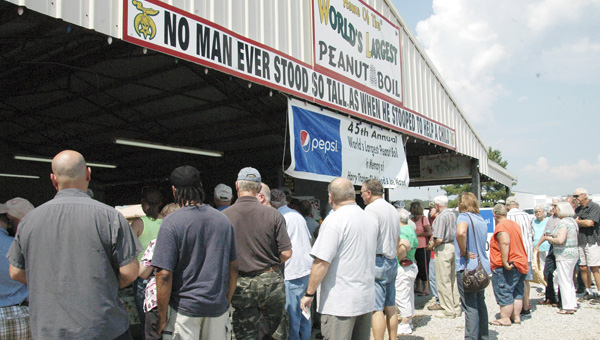 BNI NEWS SERVICES | JAINE TREADWELL
Peanut-lovers from near and far gathered at the 45th year of the World’s Largest Peanut Boil.

The wait line at the World’s Largest Peanut Boil in Luverne Thursday was long. The sun was hot and the air was not moving, but no one was complaining.

Folks from “just down the road” and, as far away as Cullman, were patiently waiting for the next batch of goobers to be bagged.

“We’ve already given out of the boiled peanuts twice and it’s one o’clock, said William Baker, president of the sponsoring Crenshaw County Shrine Club. “We’ve got orders to fill and a big crowd waiting but we can only boil so many and so fast.”

This year is the 45th anniversary of the World’s Largest Peanut Boil that was co-founded by Shriners Aubrey Alford and W.E. Granger.

Baker said probably none of the Shriners who gave birth to the idea of the peanut boil ever thought it would still be going strong after four decades and counting.

“Goodness how delicious, eating goober peas,” sang an older gentleman. He laughed as did those around him. “That’s an old Civil War song. Georgia farm boys, I think, put the words to the tune. Can’t give my name. They’d want me to be on that TV talent show.”

The atmosphere was light and lively at the annual peanut boil. Everyone seemed content to wait for the peanuts to boil.

“We’ll boil four and a half tons or more of peanuts, and we’ve got a ton of parched peanuts for those who like them,” Baker said. “That’s nearly six tons, and we hope to have plenty for sale through the weekend and still have some for sale on Monday. We just don’t want to be boiling on Labor Day.”