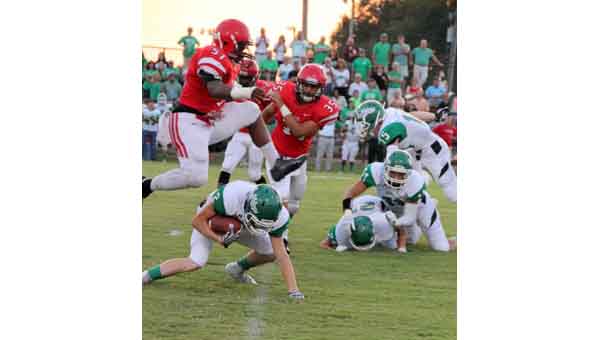 Luverne head coach Scott Rials had a crowd of people waiting for him after Thursday’s 26-12 defeat of Brantley. The Tigers fans just wanted to shake his hand and thank him.

The win may not have counted in regional play, but it counted to a town that has waited five years for the bragging rights.

“We’re just putting all the pieces together,” Rials said. “And our guys are understanding what we are trying to do.”

Rials was especially pleased with his defensive line.

“They’ve improved a tremendous amount from last week to this one,” said Brantley head coach Ashley Kilcrease after the game. “Games usually come down to the team that makes the least mistakes. This time, that wasn’t us.”

Luverne Quarterback Austin Bryant was 7-for-10 passing, including one 46-yard touchdown pass. He had 15 carries for 166 yards with one 72-yard touchdown run.

“He’s pretty tough,” Rials said of Bryant. “From spring to now, he has really grown and has done a really good job.”

Luverne’s Tyrus Jones had a good night. The junior had 18 carries for 85 yards and two touchdowns.

Other Luverne standouts included Cardeze Simmons, who had two carries for six yards. He also received two passes for 69 yards, one of which was a 46-yard touchdown.

Luverne Senior LaBronze Barber had rushed one yard and caught four passes for 27 yards. He also had an interception.

Tiger Blake Meadows had one carry for seven yard and Hunter Devoss had an interception.

For Brantley, quarterback Jacob Free was 16-for-36 passing for a total of 267 yards. He rushed two times, losing three yards.

Xavius Coleman led Brantley rushing with 12 carries for 95 yards and one 20-yard touchdown run. He caught four passes for 78 yards.

The Bulldogs may have been down, but they were not out. Kilcrease said he was going to take what they learned from Thursday’s game and have stronger practices.

“We lost this game in 2009 and we won the state championship after the loss to Luverne,” Kilcrease said. “We’re going to go back and hopefully, get better.”