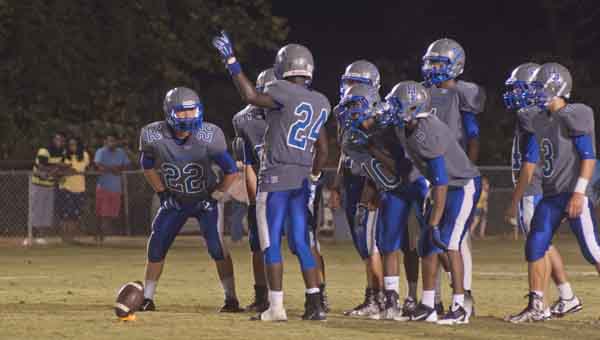 JOURNAL PHOTO | MONA MOORE
Highland Home prepares for a kickoff after scoring a touchdown during the third quarter of last Friday’s game.

It was a night of penalties as the McKenzie Tigers took on the Flying Squadron at Highland Home. McKenzie came out on top 61-20.

“We did not play well at all,” said HHS head coach Gregg Baker. “Too many mistakes, penalties missed assignments, missed tackles, etc.”

The Tigers (1-0) had struggled with their jamboree game, racking up the errors.

This time, it was the Squadron’s turn.

“Our team wasn’t mentally focused on the game.”

The Tigers’ third touchdown came with 7:05 to go in the first quarter. Highland Home lost the ball after an illegal procedure penalty and McKenzie’s Robert Shufford ran the ball in, bringing the score to 22-0. The team’s two-point conversion attempt was no good.

The Squadron lost a yard on a keeper. On the second down, with 11 yards to go, Highland Home picked up a 15-yard penalty.

With 3:44 to go in the first quarter, McKenzie’s Pugh had a 17-yard touchdown run. Highland Home held the Tigers at 28-0 until the second quarter.

The Squadron had a touchdown within their sights, taking the ball all the way to the 1-yard-line.

The team also saw more penalties. Both teams were called out for unsportsmanlike conduct.

On McKenzie’s next possession, the teams lined up on McKenzie’s 27. Quarterback William Brown passed the ball to Pugh and Merriweather took Pugh down at the 42.

JarMarrie Womack had the next McKenzie carry. Highland Home’s Clay Hobbs tackled the Tiger before he got too far.

With 6:03 in the second quarter, Shufford ran a 52-yard touchdown. A successful kick brought the score up to 35-0 and Highland Home earned a 10-yard penalty on the next play.

On McKenzie’s next possession, the team inched its way back to the goal line and Womack walked into the end zone for another touchdown, 41-0.

McKenzie lost five yards for a personal penalty and ended the first half with 41-0.

With a 48-point lead, Norris cleared off the bench in the third quarter. That gave Highland Home a chance to get rid of their goose egg.

“I hated giving up the shutout,” Norris said. “But I tried to create the depth we’d need later in the season.”

With 5:40 left in the third, Highland Home earned their first touchdown, bringing the score to 48-6.

The second Highland Home touchdown came in the fourth. Quarterback Daniel Phillips threw a touchdown pass to Merriweather, bringing the score to 48-12 with 10:14 left in the game. The pair later completed a 24-yard touchdown pass to give HHS 18 points. A successful two-point conversion made the score 48-20.

Highland Home averaged 12 yards per pass and put up 156 yards for the night.

Highland Home will start regional play Friday night. The game against Central Hayneville is slated for 7 p.m. at Highland Home.

“Central is a very athletic group. They have big, skilled athletes that can beat you on any play if you are not playing your responsibility,” Baker said. “Our youth and inexperience showed in a big way Friday. We cannot allow that to be an excuse. We must work harder and prepare ourselves for this week. One week at a time.”