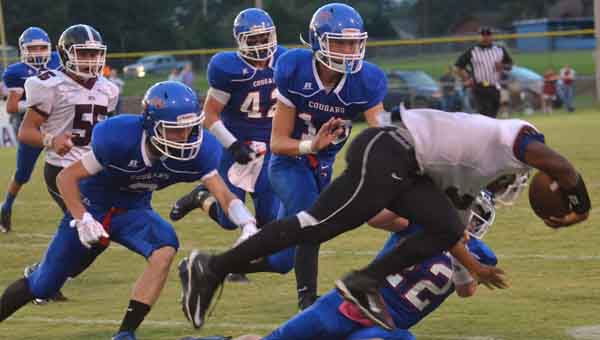 A strong first half gave the Cougars just what they wanted, a win against South Montgomery Academy. Crenshaw won the regional game 26-6.

“In the first half, we came out and played really well,” said head coach Dean Briggs. “We played like we we’re capable of playing.”

The Cougars had about 250 yards of offense for the night, with 150 of it passing.

On the other side of those passes were upperclassmen Collin Holloway, Britt Kelley and Brandon White. Holloway also had a rushing touchdown.

Kelley was responsible for one interception. The play kept the Cougars momentum going.

Briggs said his team needed a boost in the third quarter, which was not as strong as the first half. But the Cougars came back and finished strong in the fourth.

The Cougars will travel to Sparta Academy Friday.

“Sparta is a very physical team. They usually play very hard,” Briggs said. “They’ve got a quarterback that can run and he can throw, which is always a problem. They’re not really good in their kicking game, but they’re a pretty disciplined football team.”

The Cougars had a productive Monday and fought through a tough, physical practice Tuesday. The team spent the rest of the week preparing for the Sparta offense and introducing a few new defensive moves to the playbook.

Briggs wants to see improvement on both sides of the ball.

“If we can come out and play like we did the first half (of the SMA game), impose our game, play hard, fast, physical ball, we’ll do well,” he said. “We’ve got to have a full game we have yet to do that. And it’s going to take a full game if we want to come out and beat these guys.”