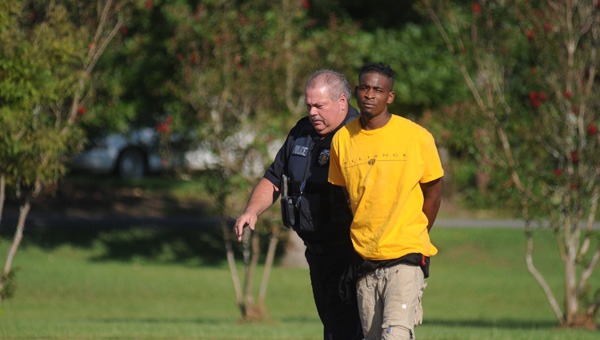 Sgt. Danny Bond leads Jimmy Little into the Greenville Police Department Wednesday. Little is a person of interest in a shooting that took place on South Street.

Greenville police have a person of interest in custody in connection with a shooting that occurred on Wednesday.

Jimmy Little, 28, of Greenville, is being held in connection with the shooting of a 47-year-old man. The shooting took place around 4 p.m. on South Street.

“When officers arrived on the scene they found the victim in the backyard with a gunshot wound to the head,” Capt. Justin Lovvorn said. “At this point his condition is unknown.”

Authorities are not releasing the victim’s name until his family has been notified.

Little was taken into custody at Perdue Village Apartments.

“We got a call that the suspect was several streets away on foot,” Lovvorn said. “Officers responded to the area and located the person of interest hiding on an upstairs balcony. He was taken into custody without incident.”

Police are continuing to process the crime scene and collect witness statements.