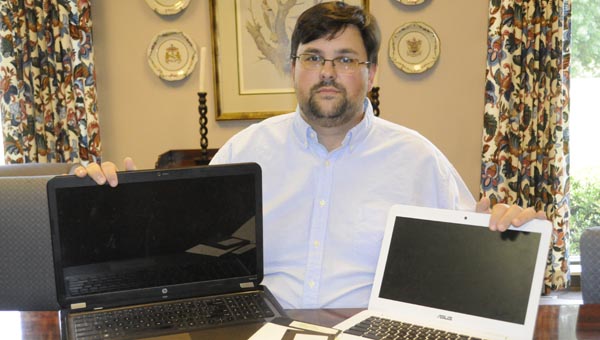 Jeremy Coleman first fell in love with computers as a child when he would tag along with his father, Mark, to McKenzie School during the summer to upgrade the memory in the school’s Apple computers.

He later took computer programing as a student at Greenville Middle School and his love for computers and technology grew.

Now Coleman, who has more than 14 years of experience in technology-based fields, is sharing that passion with a new crop of students.

The Greenville High School graduate is teaching Fundamentals of Computing and Intro to Programming to sixth through 12th graders. The class meets the first and third Mondays of the month at the Greenville-Butler County Public Library.

Coleman said the class was born out of need.

“There are several people who work in the technology industry that grew up in Greenville and have secured high earning careers,” Coleman said. “I want to make sure that the current generation of students know that this is an option for them as a career. That led to the discovery that there is a gap in the entire county, including public and private schools.  When I went through sixth grade at Greenville (Middle) School, in the dark ages of 1990, we had a programming elective. It’s silly that 25 years later, we can’t offer the same opportunities to the students of this community. As a product of Greenville public schools, I know how many people from Greenville that have (science, technology, engineering and mathematics) careers now.  So the conclusion that I came to was that I couldn’t just recognize a problem and not be willing to be part of the solution.  Hopefully these classes will be a window into the STEM world with a view that’s not available any other way.  This wouldn’t be possible without the flexibility of homeschool, where we can adjust the curriculum to not only meet the scholastic needs, but also bring in a vocational aspect of education for our children.”

While Coleman doesn’t claim to be a teacher, he’s had plenty of experience educating others on technology.

“Anyone that ‘works with computers’ will tell you that you get asked questions from friends and family,” he said. “ So education is really part of the job. I have created several classes for training programs throughout my career, but those were all adults.  This is my first class intended for teenagers.  Fortunately, I grew up in a household with two educators, so I’m sure some of that has rubbed off on me.  Depending on the day, my parents might differ on the quality of how well I listened.”

Coleman’s class aims to teach students to change the way they view technology, prepare them for college level programming and STEM classes and expose them to technology-related careers.

“Since its really two different classes, I want them to take away different things,” Coleman said. “The first class, Fundamentals of Computing, should teach them the cyclical and foundational concepts that will help them in the future. For example, there are basic principles of technology that link a vinyl record in a jukebox to a hard drive in a datacenter at the NSA.

“Secondly, the programming class will introduce them to coding. The language isn’t nearly as important as teaching your brain to think in a step-wise manner. That skill will help you in programming, engineering, or even just troubleshooting a problem with you car in the driveway.”

The classes are free and are open to all students in sixth through 12th grades.

“I have had some adults express interest so they can sit in and audit the class if they would like to,” Coleman said. “While this was primarily meant for the families who homeschool, every one that is interested is welcome.”

Coleman thanks GBCPL Director Kevin Pearcey for providing a venue to teach the classes, and said that he’d be willing to consider teaching topical seminars, such as online identity safety, if there was enough interest from adults in the community.

The next class will meet Monday.