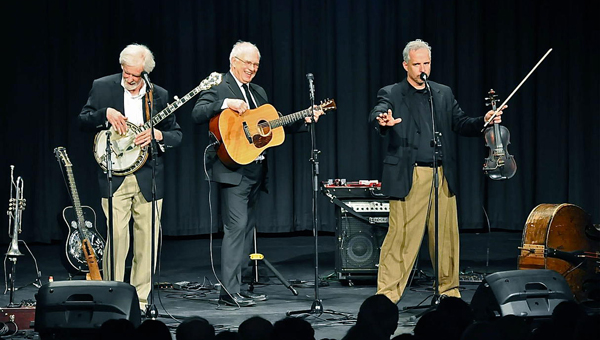 The Greenville Area Arts Council recently announced the lineup for its 34th season, and it has a distinctly local flair.

Alabama natives Three on a String, Ray Reach and the Little Big Band and The Steel Drivers will all perform at the historic Ritz Theatre as part of the GAAC’s upcoming season.

“We are thrilled to present three acts from right here in our state this season,” said Nancy Idland, Greenville Area Arts Council executive director. “There is not much better than home, and Alabama can boast some wonderful talent. We are excited to have all of these groups visit Greenville. We hope everyone will come on down to the theater and enjoy this season of live music.”

Billy McGuigan kicks off the season on Oct. 5 with his show “Rock Legends.” The show will feature music ranging from 1950s rock and roll from Elvis Presley to the sounds of the 1960s with artists like The Rolling Stones and Janis Joplin all the way to the 1980s with music from Tom Petty and the Heartbreakers and U2.

“Billy and the band will bring the nostalgia of many legends to the Ritz stage with hits from Janis Joplin, The Everly Brothers, the Jackson 5, Stevie Wonder, The Eagles, Elton John and Billy Joel to name a few,” said Idland. “It’s a great show to kick off season 34!”

Three on a String will take the Ritz stage Nov. 17. The band played its first show 44 years ago in Steel, Ala., and since has toured the U.S. and Canada. Their show will feature everything from big band music to bluegrass, along with a little comedy.

“With over 40 years in the entertainment business Three on a String offers the perfect mix of music and humor,” Idland said.  “This show can be described in one word — fun.”

On Dec. 8, Ray Reach and the Little Big Band will help spread a little Christmas cheer in the Camellia City with their show “A Swinging Christmas.” Joining the group for the second act will be Greenville native Lindsey Benedict, who recently released her album “Jazz is Heaven.”

“It will be an evening of sheer musical delight with this mini orchestra and the added joy of hearing hometown girl Lindsey Kennedy Benedict,” said Idland.

The season will come to a close on Jan. 22 with The Steel Drivers.

“The Grammy nominated Steel Drivers are headed south from Florence, Alabama to do their thing on our Ritz stage,” Idland said.  “We couldn’t be more excited to present this blue grass group live at the Ritz. This one is definitely a must see.”

A season pass to all four shows can be purchased for $40 for adults. Tickets to each individual show are $20.

“A season ticket is the way to go,” Idland said.